Washington, DC–(ENEWSPF)–January 28, 2013. Research published Thursday indicates that pesticides widely used on farms are highly toxic to frogs. Researcher Carsten Brühl, Ph.D., at the University of Koblenz-Landau in Germany called the results “alarming” with the potential for “large-scale effects” on amphibians. Two chemicals commonly used in orchards and on grains demonstrated a 100% mortality rate when researchers applied doses recommended on the label, raising serious concerns about the strength of pesticide regulations. The research builds on Brühl’s previous work on the ability of frogs to absorb pesticides through their porous skin, which is necessary for breathing underwater. More importantly, the study highlights the threats that pesticides post to biodiversity.

Amphibians are considered the most threatened and rapidly declining vertebrate group, with more than a third of all 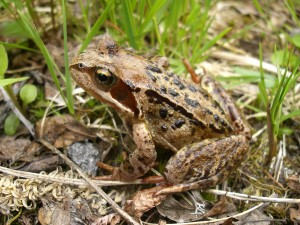 amphibians listed in the International Union for Conservation of Nature and Natural Resources (IUCN) “Red List” of threatened species. The organization lists loss of habitat, climate change, and disease as the most serious threats to amphibian populations. The scientific community is increasingly recognizing the role of chemical pollutants in amphibian decline. Though sadly, regulatory agencies do not: pesticides are not even required to be tested on amphibians before the pesticide is approved. Brühl commented to The Guardian that “We could only find one study for one pesticide that was using an exposure likely to occur on farmland.”

This study, then, fills a research void in understanding the impacts of pesticides to amphibians. The study tested an array of seven insecticides, fungicides, and herbicides on the juvenile European Common Frog (Rana temporaria)  at three different doses, the recommended dose, a tenth the dose, and ten times the recommended dose. One of the most striking results was  for pyraclostrobin, a fungicide manufactured by BASF and sold as the product “Headline”: The product killed all of the frog within an hour when applied at label recommended rates. Others demonstrated acute toxicity even when researchers applied a tenth of the dose recommended on the label. For example, dimethoate, a toxic insecticide used on everything from asparagus and cherries, to tangerines and wheat, killed 40% of all frogs within a week of application.

The results confirmed research indicating that frog skin is highly permeable. Its skin is designed to allow easy gas, water, and electrolyte exchange, allowing them to breathe underwater and metabolize quickly. However, because frogs can absorb chemicals twice as quickly mammals, they are also extremely susceptible to changes in their environment.

The exposure of frogs to commonly used pesticides like Headline and Captain, both of which demonstrated a 100% mortality rate at recommended doses, is likely to have large scale negative impacts on amphibian populations worldwide. The use of Headline is ubiquitous, applied to 90 different crops from wheat production in Canada to soybean production in Argentina.

The manufacturer, BASF, responded by dismissing the report: “This study was performed under laboratory ‘worst-case conditions,’ under normal agricultural conditions amphibians are not exposed to such pesticide concentrations.” In fact, the study found frog mortality at application rates at a tenth of label requirements, which is similar to real life circumstances. Similarly, farmers often apply multiple sprays of various chemicals which were not assessed here, despite likely synergistic impacts. Finally, the impact of chemicals like pyraclostrobin and dimethoate, both with known development impacts, to frog health, reproduction, and survival were also not included in the analysis.

The role of environmental factors on growth and development in amphibians will be a topic of discussion at the 31st National Pesticide Forum on April 5-6, 2013 at University of New Mexico in Albuquerque, NM. Conference speaker Tyrone Hayes, Ph.D.,  professor of Integrative Biology at the University of California, Berkeley, will discuss his research on pesticides, including atrazine, as a cause of serious deformities for amphibians. We invite you to join researchers, authors, organic business leaders, elected officials, activists, and others to discuss the latest pesticide science, policy solutions, and grassroots action. For more information, including a full speaker list please see the Forum webpage. Register now!