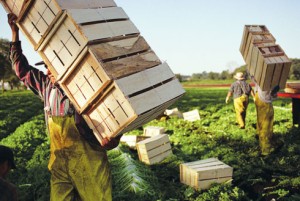 farmworker advocates have become increasingly uncomfortable with the new proposal for pesticide safety measures which does not include details on how the proposed rule will protect agricultural workers, farmers, and applicators. These sentiments stem from the concern that this may mean less stringent regulations than those originally proposed.

Advocacy groups have raised pointed complaints on the new document’s prose: “I have to agree that we are just really in the dark,” said one environmental group lawyer, “It is mysterious that it’s taken them so long to come up with a draft to propose, and the fact that they are being kind of tight-lipped about it and that even the very minimal detail about the proposal that was in the 2010 document disappeared from the 2012 document.”

Although the EPA is currently evaluating comments, stakeholders will continue to be able to provide formal comments in the Federal Register after the rule is finalized, which is scheduled to occur at an unspecified date in 2013. (Note that the handout only provided one bullet point on the release date for publication for the proposed review as “Goal is 2013.”) This will represent the first time since 1995 that the EPA’s Office of Chemical Safety and Pollution Prevention has revised the WPS.

In the meantime, we will just have to wait for the finalized proposed rule—whose deadline has also been put into question, as EPA has already delayed the release of its proposal, notably failing to reach its May 2012 deadline. These delays are unconscionable particularly as the absence of the proposal allows further exposure and harm to farm workers and applicators that would otherwise be protected.

In the past, fears of delay have prompted several environmental advocacy groups to threaten EPA with legal action if the agency did not move more quickly on this proposal. In 2011, one such petition to EPA also suggested ways of strengthening the 2010 proposal to include monitoring on levels of exposure to organophosphate and n-methyl carbamate pesticides; expanding training required for farm workers and applicators; improving hazard communications and pesticide notification for farm workers; and finally providing for cleaning stations for workers to shower, change and store clothes.

As it was, the handout of 2010 provided key goals with points that explicitly delineated in further detail how to execute the goal, including: “[r]educe retraining interval,” “[e]xpand training contents” and “[e]liminate grace period.” In comparison, the 2012 handout on WPS contains only the goals, and eliminates the accompanying details on how to execute these goals.

The vague language of the new document and threats of further delays to releasing the Worker Protection Standards, is troubling for for farmworkers and applicators that would benefit from stronger protections from pesticide exposure.

Our food choices have a direct effect on those who grow and harvest what we eat around the world. This is why food labeled organic is the right choice. In addition to serious health questions linked to actual residues of toxic pesticides on the food we eat, our food buying decisions support or reject hazardous agricultural practices, protection of farmworkers and farm families.

For more information on the importance of eating organic food for you, workers and the environment, check out Beyond Pesticides’ Eating with a Conscience food guide and organic food program page.