Washington, DC–(ENEWSPF)–February 19, 2013.  On February 14, Beyond Pesticides joined with Earthjustice, Farmworker Justice, and a number of other environmental and farmworker organizations to submit a letter to Environmental Protection Agency (EPA) Administrator Lisa Jackson, urging for long overdue revisions to the Workers Protection Standard (WPS) of the Federal Insecticide, Fungicide and Rodenticide Act (FIFRA). 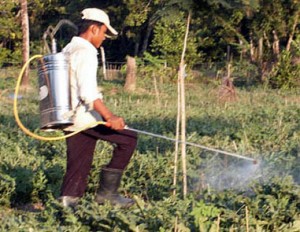 The letter states that, “EPA’s inaction is unacceptable given farmworkers’ persistent exposure to harmful pesticides and ineffectual enforcement of the current WPS.” This letter comes after a previous petition in 2011 stressed the need for the agency to implement stronger protections for farmworkers. This letter also comes after fears from environmental and farmworker organizations over a recent EPA handout distributed during a November 2012 Pesticide Program Dialogue Committee (PPDC) meeting that downplayed the details of a 2010 EPA document released on farmworker safety. EPA has not effectively updated WPS for almost 20 years, leaving farmworkers at risk.

Farm work is demanding and dangerous physical labor. A 2008 study by a National Institute for Occupational Safety and Health (NIOSH) researcher finds that the incidence rate of pesticide poisoning is extremely high among U.S. agricultural workers. An average of 57.6 out of every 100,000 agricultural workers experience acute pesticide poisoning, illness or injury each year, the same order of magnitude as the annual incidence rate of breast cancer in the United States. As a result of cumulative long-term exposures, they and their children, who often times also work on the farm, are at risk of developing serious chronic health problems such as cancer, neurological impairments and Parkinson’s disease. Children, according to a recent American Academy of Pediatrics (AAP) report, face even greater health risks compared to adults when exposed to pesticides

The 2011 petition recommends that revisions to WPS focus on three key protections for the workers who handle and apply pesticides:

In addition, the petition requests a range of basic measures that would afford stronger protections for agricultural fieldworkers.

The groups argue that EPA is required to incorporate these protections into its revisions both under FIFRA, the federal statute regulating pesticides, and under the agency’s stated obligation to achieve environmental justice by addressing the disproportionately high and adverse human health or environmental effects of its programs and policies on minority and low-income populations.

Environmental and farmworker groups have grown increasingly concerned over the possible changes to WPS. After a 2010 EPA document proposed WPS that would determine ways to increase training, improve safety requirements, provide clear emergency information, and create strong protection for applicators, the agency has abruptly changed course. A handout distributed at the 2012 PPDC meeting downplayed the details within those goals, bringing into question the agency’s previous commitments. Advocacy groups are disturbed by EPA’s mercurial attitude towards farmworker protection, and fearful that there will be further delays in releasing WPS.

This recent letter submitted by Beyond Pesticides and other environmental and farmworker organizations highlights these fears and urges EPA to publish the proposed rule revising the WPS without further delay.  The letter argues:

“In sum, EPA has violated its legal and moral duty to protect farmworkers from being exposed to significant levels of toxic pesticides on the job. EPA must stop merely expressing its concern, and take meaningful steps to protect these workers, who are critical to the economy of the nation, from the pesticides they handle, including, at a minimum, adopting the safeguards we identify in the Petition.”

Our food choices have a direct effect on those who grow and harvest what we eat around the world. This is why food labeled organic is the right choice. In addition to serious health questions linked to actual residues of toxic pesticides on the food we eat, our food buying decisions support or reject hazardous agricultural practices, and the protection of farmworkers and farm families. See Beyond Pesticides’ guide Eating with a Conscience to see how your food choices can protect farmworkers.

Farmworker safety will be an important topic discussed further at the 31st Annual Pesticide Forum. Beyond Pesticides is collaborating with local groups to bring top scientists together with local and national activists and concerned citizens to share information on the issues local communities are facing. At the forum, participants and speakers alike will craft solutions and catalyze networks to advance positive health and environmental policy and change. Sustainable Families, Farms and Food: Resilient communities through organic practices will be held April 5-6, 2013 at the University of New Mexico in Albuquerque, NM. For more information and to register, go to www.beyondpesticides.org/forum.