Washington, DC–(ENEWSPF)–November 28, 2012.  Earlier this year the maker of the fumigant methyl iodide indicated it would stop producing the toxic chemical. Now, the U.S. Environmental Protection Agency (EPA) and the registrant, Arysta LifeScience North America, LLC have entered into a Memorandum of Agreement to formally terminate all agricultural use of methyl iodide in the U.S. by the end of 2012 and ultimately remove all methyl iodide products from the U.S. market. 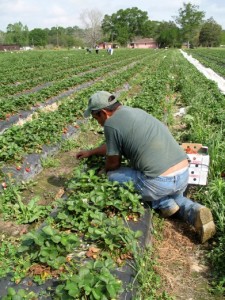 Arysta’s request for voluntary cancellation of all of the company’s methyl iodide product registrations, as stipulated in the agreement. Methyl iodide, or iodomethane, has been registered since 2007 for use as a pre-plant soil fumigant to control pests in soil where fruits, vegetables, ornamental plants, and turf are to be grown. In March 2012, Arysta, the sole registrant, announced its plans to immediately suspend all sales of its methyl iodide MIDAS® products in the U.S.

Under the recently signed agreement and the voluntary cancellation request, all of Arysta’s existing methyl iodide end-use product registrations will be cancelled and use of existing stocks in the U.S. will be prohibited effective December 31, 2012. Further distribution and sale of methyl iodide end-use products will be prohibited, and users and distributors are expected to return the products to Arysta (the company will take back existing stocks) or for proper disposal or export. As of January 1, 2013, Arysta may no longer produce methyl iodide for use in the U.S. The technical product registration will be cancelled effective December 1, 2015. After that date, all sale and distribution of the technical product to formulators will also be prohibited, however stocks are permitted to be exported until supplies are exhausted. Arysta will send methyl iodide product purchasers and retailers a letter describing these provisions.

All of this is announced in EPA’s November 21, 2012 Federal Register notice (77 FR 69840). EPA anticipates finalizing the cancellation order by the end of 2012, after which the agency plans to respond to a March 2010 petition from Earthjustice and other organizations requesting that the agency suspend and cancel all methyl iodide registrations. Earthjustice, Pesticide Action Network North America (PANNA), Pesticide Watch, Californians for Pesticide Reform, Farmworker Association of Florida, and others petitioned EPA to exercise its authority under Section 6 of the Federal Insecticide Fungicide and Rodenticide Act (FIFRA) to suspend and cancel all registrations for the pesticide methyl iodide, citing that the chemical poses “unreasonable adverse effects on the environment.”

At the same time, several environmental groups sued the State of California in an attempt to reverse the state’s approval of the chemical. Environmental advocacy groups and other opponents of methyl iodide use in the state have released documents detailing dissension in the ranks of the California Department of Pesticide Regulation (CDPR) over the risk assessment of methyl iodide and its subsequent approval. The court case revealed documents showing CDPR manipulated data and that department scientists were worried risk managers minimized health dangers and did not take strong enough steps to mitigate the threats. One of the released documents, a memo from one disapproving CDPR scientist, chastised the agency for its cut-and-paste approach to calculations determining how big buffer zones should be to protect public health. A California Superior Court Judge raised concerns about whether CDPR complied with its legal obligation to consider alternative options before approving the use. The voluntary cancellation appears to end the need to pursue legal action for U.S. uses.

Methyl iodide was developed as an alternative to the fumigant methyl bromide, a notorious ozone-depletor. Methyl bromide has been nominally banned in industrialized countries by international treaty. While methyl iodide’s impact on the ozone layer is unquestionably far less than that of methyl bromide, its toxicity is now known to be significantly greater than assumed by EPA at the time of registration, as is its potential to contaminate sources of drinking water. In 2007, EPA approved a time-limited, one-year conditional registration of methyl iodide despite serious concerns raised by a group of over 50 eminent scientists, including six Nobel Laureates in Chemistry. These scientists sent a letter of concern to EPA explaining, “Because of methyl iodide’s high volatility and water solubility, broad use of this chemical in agriculture will guarantee substantial releases to air, surface waters and groundwater, and will result in exposures for many people.” In, 2008, EPA issued a new registration notice converting the time-limited conditional registration to a time-unlimited conditional registration, leaving as conditions only the requirements that the registrant provide a product training/stewardship program and that it follow the data and label submission requirements of other soil fumigants.

Methyl iodide is applied to much of California’s strawberry fields at rates up to 100 pounds per acre on the state’s 38,000 acres in strawberry production, totaling millions of pounds of use. Though methyl iodide was to be used primarily on strawberries, it was also registered for use on tomatoes, peppers, nurseries and on soils prior to replanting orchards and vineyards.

Methyl iodide causes late term miscarriages, contaminates groundwater and is so reliably carcinogenic that it’s used to create cancer cells in laboratories. It is on California’s official list of known carcinogenic chemicals and has been linked to serious risks in reproductive and neurological health. The pesticide poses the most direct risks to farmworkers and those in the surrounding communities because of the volume applied to fields and its tendency to drift off-site through the air. As a result, use of the fumigant carries severe restrictions on use near schools and residential areas.

Luckily, there are less toxic ways to grow strawberries and other crops that have relied on fumigant pesticides like methyl iodide. Organic agriculture for instance does not allow fumigants or hazardous pesticides when growing crops, and there is a thriving organic strawberry industry in California and around the country. However, organic certifiers have allowed strawberry plant stock, or starts, to be grown with methyl bromide, even though a commercially viable method had been developed without its use. This issue is now be considered by the National Organic Program, as it develops guidance on non-organic planting stock in organic production. See Draft Guidance on Seeds, Annual Seedlings, and Planting Stock in Organic Crop Production. Beyond Pesticides has submitted extensive comments on this issue and called for an end to the practice of using methyl bromide in organic strawberry planting stock, pointing to a 2005 National Organic Standards Board recommendation on commercial availability and other issues.

Other alternatives to methyl bromide include selecting more resilient varieties and improved cultivars of strawberries, as well as incorporating traditional cultural practices such as crop rotation, cover crops, and physical methods such as soil solarization and anaerobic disinfestation.

The methyl iodide Memorandum of Agreement and the EPA’s Federal Register notice announcing the voluntary cancellation request is available in docket EPA-HQ-OPP-2005-0252 at www.regulations.gov and on EPA’s methyl iodide page.