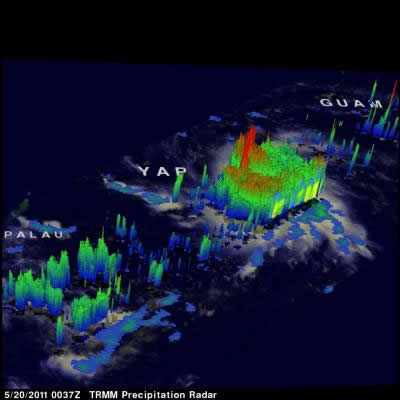 This TRMM satellite 3-D image shows that some thunderstorm towers near TSO4W’s center of circulation were punching up to heights of over 16 km (~9.9 miles) above the ocean’s surface. (Photo: NASA/SSAI, Hal Pierce)

The TRMM satellite flew over rapidly forming Tropical Storm 04W in the western Pacific on May 20, 2011 at 0037 UTC (~10:37 a.m. Local time). This daylight TRMM pass showed that TS04W was becoming much better organized. The TRMM data showed that TSO4W now contained several areas of heavy thunderstorms dropping rain at over ~2 inches/hour (50 mm/hour).

The 3-D image was created using data from TRMM’s Precipitation Radar (PR). It showed that some thunderstorm towers near TSO4W’s center of circulation were punching up to heights of over 9.9 miles (16 km) above the ocean’s surface.

Regional warnings have been posted for TS04W. A tropical storm warning is in force for Fais and Ulithi in Yap State. That means that winds of 40 mph (65 kmh) or higher are expected within 24 hours in the warning area. In addition, a tropical storm watch is in force for Yap and Ngulu in Yap State. The watch means that in 48 hours, those areas could experience winds of 40 mph (65 kmh) or higher.

Now, Tropical Storm 04W is on a west-northwesterly track and residents of the northern Philippines should be on guard as it heads in that direction. The current forecast track from the Joint Typhoon Warning Center extends to May 25 and it is not yet expected to be close enough to land at that time. However, in the days after May 25 residents of Luzon, the Philippines may experience the effects of the approaching tropical storm (which is expected to strengthen by that time).

This storm is predicted to become a category 2 typhoon with wind speeds of 90 knots (~103 mph/166 kmh) within five days as it moves toward the west-northwest.