NASA-(ENEWSPF)- On July 23, 2012, a massive cloud of solar material erupted off the sun’s right side, zooming out into space, passing one of NASA’s Solar TErrestrial RElations Observatory (STEREO) spacecraft along the way. Using the STEREO data, scientists at NASA’s Goddard Space Flight Center in Greenbelt, Md. clocked this giant cloud, known as a coronal mass ejection, or CME, as traveling between 1,800 and 2,200 miles per second as it left the sun.

Conversations began to buzz and the emails to fly: this was the fastest CME ever observed by STEREO, which since its launch in 2006 has helped make CME speed measurements much more precise. Such an unusually strong bout of space weather gives scientists an opportunity to observe how these events affect the space around the sun, as well as to improve their understanding of what causes them.

"Between 1,800 and 2,200 miles per second puts it without question as one of the top five CMEs ever measured by any spacecraft," says solar scientist Alex Young at Goddard. "And if it’s at the top of that velocity range it’s probably the fastest."

The STEREO mission consists of two spacecraft with orbits that for most of their journey give them views of the sun that cannot be had from Earth. Watching the sun from all sides helps improve our understanding of how events around the sun are connected, as well as gives us glimpses of activity we might not otherwise see. On July 23, STEREO-A lay – from Earth’s perspective — to the right side and a little behind the sun, the perfect place for seeing this CME, which would otherwise have been hard to measure from Earth. The Solar Heliospheric Observatory (SOHO), an ESA and NASA mission, also observed the CME. It is the combination of observations from both missions that helps make scientists confident in the large velocities they measured for this event.

Measuring a CME at this speed, traveling in a direction safely away from Earth, represents a fantastic opportunity for researchers studying the sun’s effects. Rebekah Evans is a space scientist working at Goddard’s Space Weather Lab, which works to improve models that could some day be used to improve predictions of space weather and its effects. She says that the team categorizes CMEs for their research in terms of their speed, with the fastest ones – such as this one — labeled "ER" for Extremely Rare.

"Seeing a CME this fast, really is so unusual," says Evans. "And now we have this great chance to study this powerful space weather, to better understand what causes these great explosions, and to improve our models to incorporate what happens during events as rare as these."

NASA’s Space Weather Research Center modeled the July 23, 2012 CME using a modeling program called ENLIL. The CME can be seen to expand dramatically as it travels through space. By comparing how well such model predictions compare to an actual event, scientists can improve forecasts of space weather.

Orbiting the sun some 89,000,000 miles away, STEREO-A could observe the speed of the CME as it burst from the sun, and it provided even more data some 17 hours later as the CME physically swept by – having slowed down by then to about 750 miles per second. STEREO has instruments to measure the magnetic field strength, which in this case was four times as strong as the most common CMEs. When a CME with strong magnetic fields arrives near Earth, it can cause something called a geomagnetic storm that disrupts Earth’s own magnetic environment and can potentially affect satellite operations or in worst-case scenarios induce electric currents in the ground that can affect power grids.

"We measure magnetic fields in ‘Tesla’ and this CME was 80 nanoTesla," says Antti Pulkkinen, who is also a space weather scientist at Goddard. "This magnetic field is substantially larger even than the CMEs that caused large geomagnetic storms near Earth in October 2003. We call those storms the Halloween storms and scientists still study them to this day."

While large, this measurement of the magnetic field is still smaller than one of the greatest space weather events on record, the Carrington Event of 1859, during which the magnetic fields at Earth measured 110 nanoTesla.

When the CME passes over one of the STEREO spacecraft, the instruments can also measure the direction in which the magnetic field points – a crucial data point since it is the southward pointing magnetic fields in a CME that travel in the opposite direction of Earth’s own magnetic fields and thus can cause the most disruption. This CME traveled with an unusually large southward magnetic field of 40 nanoTesla that stayed steady for several hours.

The event also pushed a burst of fast protons out from the sun. The number of charged particles near STEREO jumped 100,000 times within an hour of the CME’s start. When such bursts of solar particles invade Earth’s magnetic field they are referred to as a solar radiation storm, and they can block high frequency radio communications as used, for example, by airline pilots. Like the CME, this solar energetic particle (SEP) event is also the most intense ever measured by STEREO. While the CME was not directed toward Earth, the SEP did – at a much lower intensity than at STEREO – affect Earth as well, offering scientists a chance to study how such events can widen so dramatically as they travel through space. 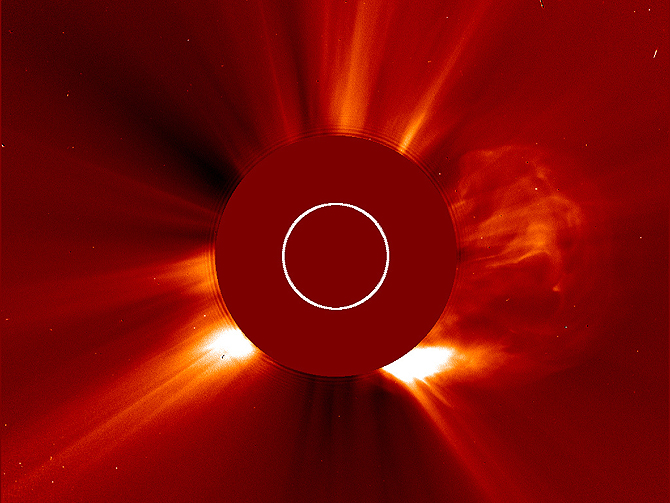 › View larger
This image was captured by ESA and NASA’s Solar and Heliospheric Observatory (SOHO) on July 22, 2012 at 10:48 PM EDT. On the right side, a cloud of solar material ejects from the sun in one of the fastest coronal mass ejections (CMEs) ever measured. Credit: ESA&NASA/SOHO

Evans points out that all of this solar activity was produced by a specific active region that NASA’s space weather scientists had been watching for three weeks before the super fast eruption on July 23.

"That active region was called AR 1520, and it produced four fairly fast CME’s in Earth’s direction before it rotated out of sight off the right limb of the sun," says Evans. "So even though the region had released multiple CMEs and even had an X-class flare, its strength kept increasing over time to eventually produce this giant explosion. To try to understand how that change happens makes for very exciting research."

STEREO is but one of several missions that observe the sun constantly, and the data is always interesting as there is much to be learned from observing the quiet sun as well as an active one. But the sun displays an activity cycle during which it gets more active approximately every 11 years as it heads toward what’s called "solar maximum." The next solar maximum is currently predicted for 2013. We can expect more and more space weather events until then, and each one will help scientists better understand the sun and how its effects can permeate the entire solar system.