Washington, DC–(ENEWSPF)–December 14, 2012.  Decision making advice by the Advisory Committee on Pesticides (ACP) and insecticide regulator, the Department for Environment, Food, and Rural Affairs (Defra), were harshly criticized on Wednesday by Members of Parliament (UK), as they discussed the problems associated with neonicotinoids, a group of neurotoxic insecticides linked to serious declines in bee and pollinator populations. The meeting was attended by Members of Parliament, members of the Advisory Committee on Pesticides, Lord de Mauley, the Parliamentary Under-Secretary of State, the Department for Environment, the Food and Rural Affairs and officials, bringing neonicotinoids and their impact on bees to the attention of the international community as well as at home.

The discussion focused on the evidence used 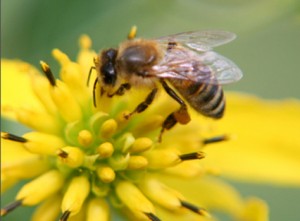 to make a decision on the allowance of neonicotinoids and plans for the future. ACP members indicated that evidence for future draft plans would be based on new studies developed in 2012 on the effects of neonicotinoids at the colony level, as well as the impact of neonicotinoids exposure in field tests, rather than in the lab. Research will likely fill the extant data gaps, the most important of which were identified by officials of Defra, the environmental regulatory agency in the UK. These include: 1. the need to standardize assessments of chronic impacts to bees in the lab, as short term acute impacts are assessed; 2. the focus on honey bees needs to be broadened, considering 90% of pollination is performed by different species like solitary bees and bumblebees; and 3. there is a need for more information on sublethal effects, particularly in the field. While the “Big 3”—clothianidin, imidacloprid, thiamethoxin—have been subjected to significant lethality and sub-lethality field tests, others need to be assessed.

The use of neonicotinoids has been strictly limited in France since the 1990s, when neonicotinoids, particularly imidacloprid, were implicated in a mass die-off of the bee population. In July thiamethoxam was banned. In the midst of dramatically declining bee populations, the German Office for Consumer Protection and Food Safety (BVD) also suspended the registration of clothianidin for seed corn use in 2008. Italy has also banned the use of neonicotinoid seed treatment outright, based on studies linking bee loss to seed treatment. Since other countries within the EU have discussed and implemented a moratorium on neonicotinoids seed treatments, the being asked is why has the UK failed to follow suspend the use of neonicotinoids? Indeed, MP Caroline Spelman put the officials to the test: “Was there any discussion on moratorium on the pesticides in ACP [considering the political decisions of France to do so]?” In essence, the MP was told by one ACP official that the decision to continue use of neonicotinoids was based on the fact that treated seeds were “already in the system.” So, although both the French and the English had examined the same weight of evidence, the French set a moratorium on neonicotinoids use while the UK continued to allow their use simply because the seeds were already in the pipeline to be planted.

The ACP was then cross-examined over its complicit acceptance of the current regulatory regime that bases its stance in part on soil accumulation studies, which have been contradicted of late by the European Food Safety Authority (EFSA): two UK studies conducted over a six year period in the 1990s concluded that imidacloprid concentrations in soil samples had reached plateau saturations levels. However, upon further assessment, EFSA concluded that in fact no plateau had been reached. The data gaps for soil accumulation should have stalled any finalized risk assessment, instead the neonicotinoids continues to be used. To further confound the issue, some of the research conducted has been severely flawed. In one study researchers took only one sample prior to planting season, when chemical concentrations were likely to be at their lowest, rather than sampling throughout the year. Harsh criticism by Members of Parliament was punctuated by one comment that this was: “a gross failure of the system…that you have told us is acceptable.” Joan Walley, MP and chair of the Environmental Audit Committee concluded that, “The European system has failed to get a regulatory system fit for purpose… [indeed] evidence seen by the committee raises serious questions about the integrity, transparency and effectiveness of EU pesticides regulation. Data available in the regulators’ own assessment report shows it could be 10 times more persistent in soils than the European safety limit.”

Imidacloprid, one of six neonicotinoids currently available, is manufactured by Bayer, which has testified that the half-life is 16 to 200 days. Research by EFSA has concluded, however, that the half-life of neonicotinoids in UK soils is several times greater than that estimate, at 1,333 and 1,268 days for winter barley experiments. This soil build up is dangerous particularly with repeated use. Professor Dave Goulson an ecologist at the University of Stirling, indicated that neonicotinoids may “accumulate[e] to concentrations very likely to cause mass mortality in most soil-dwelling animal life.”

The meeting continued in the same vein with the environment minister, Lord de Mauley, regarding the progress of plans to address the shortcomings of the regulatory system. Officials indicated that they are in the process of forming a National Action Plan which will address three priority areas: the protection of water, the encouragement of best practices for resistance issues, and develop a “more intelligent Integrated Pest Management system” that relies less on pesticides. However, when questioned on the impacts of imidacloprid and the failures of the regulatory system, Lord de Mauley responded: “The advice to government has been and remains that there are no unacceptable effects. If new work gives rise to a change in advice, we will take it,” adding that, “At the moment, I am satisfied that [European regulatory system] is working properly.”

Despite obvious failures of current regulations, Parliament is taking note of the growing body of scientific evidence linking widespread use of neonicotinoids on declines to bee and pollinator populations, and the opposition to their use is gaining momentum. Indeed, the meeting ended with rebuffs to Defra’s attempts to suggest delaying the publication of the National Action Plan. MP Walley and others on the Environmental Audit Committee are clearly is eager to get some regulations off the ground for neonicotinoids.

Learn more at Beyond Pesticides’ Pollinator Protection webpage. The full proceedings may still be viewed here.