Baltimore, MD–(ENEWSPF)–October 9, 2012.  Today the Sierra Club released a report with maps showing the potential pollution impacts from two area coal plants along with a billboard near the Crane plant and a new online campaign targeting the plant’s owners to clean up the air.

The report demonstrates that the Charles P. Crane and Herbert A. Wagner plants in Baltimore and Anne Arundel counties threaten the region with dangerous sulfur dioxide (SO2) pollution at levels more than four times what the Environmental Protection Agency (EPA) has deemed safe. Sulfur dioxide is known to cause respiratory problems including breathing difficulty, asthma attacks and diminished lung function. It can be especially dangerous for kids, the elderly and those suffering from respiratory disease.

“We’re very concerned about the impacts of this dangerous pollution from the Crane and Wagner coal plants – particularly on the more than 35,000 kids already suffering from asthma in Baltimore and Anne Arundel counties. It’s time to retire these outdated and dirty plants so that our kids can breathe easier,” said Chris Hill, Conservation Representative with the Maryland Sierra Club.

The two coal plants’ state permits currently allow them to emit quantities of SO2 that could violate the EPA’s new National Ambient Air Quality Standard, putting communities at risk across the region. The new maps illustrate where the pollution ends up and its impact on over 100 schools, parks and recreation areas as well as residential areas and parts of Baltimore’s business district.

“It’s a real concern when you see that schools and playgrounds, and even Camden Yards and the Ravens Stadium, are all located within these plumes. The Maryland Environmental Health Network has been looking at air pollution issues because we think not enough health professionals are aware of the dangers.  I hope these maps will be a resource for health care providers as well as residents,” said Rebecca Ruggles, Coordinator of the Maryland Environmental Health Network.

The billboard located off I-95 in Baltimore and new online ads ask soon-to-be new owners Riverstone Holdings LLC if they have “Buyer’s Remorse Yet?” and feature a picture of a child suffering from asthma with a call to retire the coal plants. (See image below)

“We hope Riverstone Holdings will be a responsible new neighbor and help clean up our air by retiring these aging plants. Instead of depending on outdated energy sources we know can do better with local clean energy like wind and solar that will create jobs without polluting our air and water,” said Isazetta Spikes, NAACP Maryland State Conference Health Chair.

As part of the sale process the Maryland Department of the Environment (MDE) can choose to review the plants’ permits before they are transferred and ratchet down the allowed pollution levels to meet the EPA’s standards. Doing so would force Riverstone Holdings to take action to dramatically limit the amount of pollution they’re currently allowed to emit and avoid future action by the State or EPA to enforce the new standards.

“Maryland has a great opportunity to do the right thing and fix these out of date permits that put our families at risk. MDE needs to ratchet down the pollution limits for the Crane and Wagner coal plants now, before they’re transferred to the new owners,” said Chris Yoder, Maryland Sierra Club Greater Baltimore Group Chair. 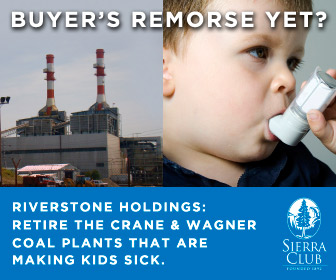