Physicists Discover a New Particle that May Be the Higgs Boson 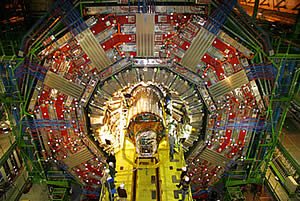 Pasadena, CA-(ENEWSPF)- Physicists at the Large Hadron Collider (LHC) in Geneva, Switzerland, have discovered a new particle that may be the long-sought Higgs boson, the fundamental particle that is thought to endow elementary particles with mass.

"This is a momentous time in the history of particle physics and in scientific exploration—the implications are profound," says Harvey Newman, professor of physics at the California Institute of Technology (Caltech). "This is experimental science at its best."

The international team of scientists and engineers—which includes a large contingent from Caltech, led by Newman and Maria Spiropulu, professor of physics—says it needs more data to determine for certain if the particle they’ve discovered is indeed the Higgs boson predicted by the Standard Model, the theory that describes how all particles interact. The results so far, however, show that it has many of the properties expected for such a particle.

"One of the most exciting aspects of this observation is that the road remains open for a vast range of ‘lookalike’ alternatives, where any deviation from the Standard Model would point the way to the existence of other new particles or forces of nature," Newman says.

Regardless of the exact identity of the new particle, CERN’s scientists say, the highly anticipated discovery heralds a new era in physics.

The physicists revealed their latest results at a seminar at the European Center for Nuclear Research (CERN) in Geneva, which was shared with the world with a live webcast and the EVO (Enabling Virtual Organizations) system developed at Caltech.

The discovery itself is based on the analysis of an unprecedented amount of data that was collected by the two main detectors at the LHC—the Compact Muon Solenoid (CMS) and A Toroidal LHC Apparatus (ATLAS). The data was collected with the LHC running at 7 teraelectron volts (TeV, a unit of energy) in 2011 and 8 TeV in 2012. TheCaltech teamis part of the CMS collaboration.

Using the CMS detector, the physicists identified signals that point to a new particle with a mass of 125 gigaelectron volts (GeV, a unit of mass; in comparison, the mass of a proton is about 1 GeV). The team running the ATLAS detector, which searches for the Higgs using a different method, reported similar results.

"This is an incredible, exciting moment," says Spiropulu. "Even these early results give us important hints as to how mass in the universe came to be. Together with hundreds of our colleagues Caltech scientists have worked for decades to reach this point: building multiple generations of experiments; designing and building detectors to precisely measure photons, electrons, and muons, which are keys to the discovery; and inventing worldwide systems that empower thousands of physicists throughout the world to collaborate day and night, share and analyze the data, and develop the new techniques leading to this great result."

To search for the Higgs, physicists have had to comb through the remains of trillions of particle collisions produced by the LHC, which accelerates protons around a ring almost five miles wide to nearly the speed of light. As the protons careen toward each other, a small fraction of them collide, creating other particles such as the Higgs. It is estimated that it takes one billion collisions to make just one Higgs boson.

The Higgs is fleeting, however, and quickly decays into lighter particles, which are the traces that allow the Higgs to be detected and analyzed. The Higgs is predicted to decay in several different ways, or channels, each resulting in different particles. CMS focuses mainly on the decay channels that result in two photons or two other particles called Z bosons. It was by measuring and analyzing these and other decay particles that the physicists were able to discover the potential Higgs.

When all the decays are taken into account in combination, the scientists announced, the data for a signal corresponding to a Standard Model Higgs boson have a statistical significance of five sigmas. This means the signal is highly unlikely to be the result of a statistical fluke caused by some rare, background fluctuation. Only when data are significant to five sigmas are physicists confident enough to declare a discovery.

Last December, evidence seen in the data from CMS generated plenty of excitement as a result of an excess of events—a slight surplus in particle collision events over what would have been expected if the Higgs does not exist—with a statistical significance of just three sigmas.

The Higgs boson is the last remaining fundamental particle predicted by the Standard Model yet to be detected, and hopes of detecting it was one of the chief reasons for building the LHC. The LHC accelerator, along with the CMS and ATLAS experiments, are arguably the largest and most complex scientific instruments ever built.

Despite its many successes, the Standard Model is incomplete—it does not incorporate gravity or dark matter, for example. One of the goals of physicists, then, is to develop more complete theories that better explain the composition of the universe and what happened during the first moments after the Big Bang. Discovering the Higgs boson—or a particle like it—is essential for developing these new theories.

The measurements of the new particle, the physicists say, are so far consistent—within statistical uncertainty—with the Higgs boson as predicted by the Standard Model. Still, they need more data to know for sure whether it is the predicted Higgs or something stranger, a Higgs lookalike—a prospect that many theorists have long been anticipating.

By the end of 2012, the Caltech researchers say, the CMS collaboration expects to more than double its current total amount of data. With more data and analysis, the scientists might then be able to confirm whether the particle they announced tonight is indeed the Higgs—and whether it is the Standard Model Higgs or a more exotic version.