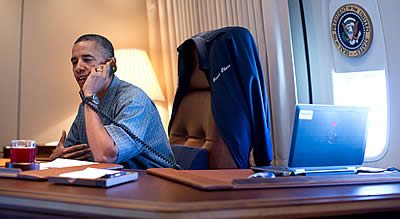 President Barack Obama talks on the phone with NASA’s Curiosity Mars rover team aboard Air Force One during a flight to Offutt Air Force Base in Nebraska, Aug. 13, 2012. (Official White House Photo by Pete Souza)

"We could not be more excited," said the President, telling the team that "it’s really mind boggling what you’ve been able to accomplish."

The president also noted his administration’s focus on engineering and science and math and said that Curiosity is inspiring kids across the country.

"You know, they’re telling their Moms and Dads they want to be part of a Mars mission, maybe even the first person to walk on Mars," said the president. He also said that the quest for knowledge represented by missions like Curiosity is "really what makes us best as a species, this curiosity that we have and this yearning to discover and know more."

President Obama’s call came a week after Curiosity landed on the Red Planet. Curiosity carries the most advanced science payload ever used on Mars’ surface. During the next two years, it will use its 10 instruments to investigate whether conditions have been favorable for microbial life and for preserving clues in the rocks about possible past life.

In addition to praising the team’s hard work, the president also joked about finding Martians and noted the popularity of the "Mohawk guy," flight director Bobak Ferdowsi.

"You guys are a little cooler than you used to be," he said.

Curiosity was designed, developed and assembled at JPL, which also is where the rover’s mission control is located. The California Institute of Technology in Pasadena manages JPL for NASA.