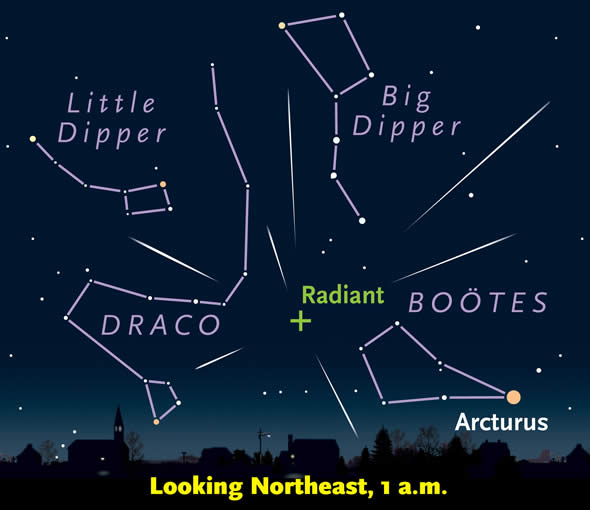 Not until early morning does the radiant of the Quadrantid meteor shower start to rise high — and don’t expect to see several at once! Sky & Telescope illustration

Celestially speaking, 2012 opens with a bang. The Quadrantid meteor shower, one of the best displays of "shooting stars" all year, will peak in the hours before dawn this Wednesday, January 4th. If you get up early, bundle up warmly, and find dark site with a wide-open view of the clear sky, you might see 1 or 2 meteors per minute during the shower’s brief but intense performance.

This year the Quadrantids are predicted to climax at 2 or 3 a.m. Eastern Standard Time on the morning of January 4th, and this timing offers very good circumstances for North Americans — especially those in the East. On that morning the waxing gibbous Moon sets about 3 a.m. local time (wherever you are), leaving the sky fully dark until dawn begins before or near 6 a.m.

Veteran skywatchers know that the "Quads" rival August’s better-known Perseids as an impressive meteor shower — but not many people have ever seen even one of them flashing across the sky. The Quadrantids have two problems, explains Alan MacRobert, a senior editor at Sky & Telescope magazine. First, the shower is brief. Peak activity usually lasts just a few hours, and if that brief interval doesn’t fall between midnight and dawn for your part of the world, you lose out. The second problem is that you have to be watching the sky in the night’s coldest hours during the year’s coldest time.

"So make it an adventure," advises MacRobert. "Plan like for an expedition." You’ll want to view from a light-free location with a wide-open sky view. Lie back in a reclining chair or on the ground. You won’t be generating much body heat, so stay snug in many layers from head to feet. Hand-warmer packets or an electric heating pad buttoned inside your coat will help (if you can run an extension cord back to the house). Be patient, and keep watch on whatever part of your sky is darkest — probably straight overhead.

A meteor shower occurs when Earth passes through the stream of little debris bits that are strewn along the orbit of a comet. When these strike Earth’s upper atmosphere, the resulting meteors can zip across any part of the sky. But trace their paths backward far enough, and you’ll see that they all seem to stream from a point, called the radiant, in a particular constellation. For example, the Perseid meteors appear to radiate from Perseus.

The Quadrantids are named for the obsolete constellation Quadrans Muralis, the Mural Quadrant, an antique device that was used for measuring celestial objects’ positions. It was located in a dim region about halfway from the end of the Big Dipper’s handle to the head of Draco. Quadrans was still widely recognized when its namesake meteor shower was first identified in 1825, but it didn’t make the cut when the International Astronomical Union set today’s official list of 88 constellations in 1930.

The source of the Quadrantids is not a comet but rather an asteroid called 2003 EH1. Dynamicists suspect it is a dead chunk of a comet that broke apart several centuries ago, and that the meteors are small bits of debris from this fragmentation.

After the Quads come and go, there won’t be another significant meteor shower until the Lyrids arrive in late April, or perhaps not until the Perseids of mid-August . The autumn months are richer in meteors. Sky & Telescope offers predictions for all the major meteor showers of 2012.

Sky Publishing (a New Track Media company) was founded in 1941 by Charles A. Federer Jr. and Helen Spence Federer, the original editors of Sky & Telescope magazine. In addition to Sky & Telescope and SkyandTelescope.com, the company publishes two annuals (Beautiful Universe and SkyWatch), as well as books, star atlases, posters, prints, globes, and other fine astronomy products.