Scientists Publish New Findings about the ‘Supernova of a Generation’

Santa Barbara, CA-(ENEWSPF)- An international team of scientists, including astrophysicists from UC Santa Barbara, has discovered that a supernova that exploded in August –– dubbed the supernova of a generation –– was a "white dwarf" star, and that its companion star could not have been a "red giant," as previously suspected. The findings are published in two papers in the journal Nature this week.

White dwarf stars are small but very dense stars, and red giants are stars that swell to massive proportions when they approach middle age. 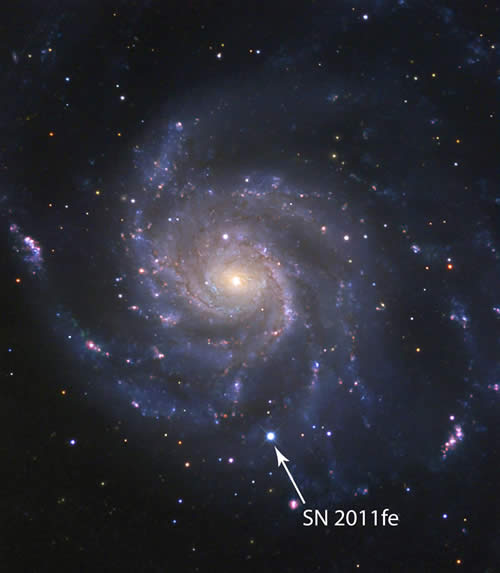 The new "type Ia" thermonuclear supernova, known as PTF 11kly, exploded on August 24th in the Pinwheel galaxy, located in the "Big Dipper," also known as Ursa Major. These supernovae are used to measure dark energy, which scientists believe is related to the expansion of the universe. The discovery of the supernova was made by an international team of astronomers known as the Palomar Transient Factory.

Located 21 million light-years away, this supernova was practically next door, in cosmic terms, and could be seen in early September with binoculars. The explosion gave scientists their best chance yet to study a thermonuclear supernova up close, with modern instruments.

Over the past 50 years, astrophysicists have discovered that type Ia supernovae are part of binary systems –– two stars orbiting each other. The one that exploded was theorized to be a white dwarf star. "That’s what our sun will be at the end of its life," said Andy Howell, a member of the UCSB team. "It will have the mass of the sun crammed into the size of the Earth." Howell is a staff scientist at the UCSB-affiliated Las Cumbres Observatory Global Telescope Network LCOGT, an assistant adjunct professor of physics at UCSB, and co-author of both papers.

Scientists are upbeat about the finding that the supernova is a white dwarf. "It’s been nearly 50 years since the original theoretical suggestions were made that these supernovae were caused by white dwarfs," said co-author Lars Bildsten. "The observational proof is very satisfying to see!" Bildsten is a permanent member of UCSB’s Kavli Institute of Theoretical Physics (KITP) and is UCSB’s Wayne Rosing, Simon and Diana Raab Chair in Theoretical Astrophysics.

Such white dwarf stars would normally be dead forever, slowly cooling and freezing solid over cosmic time. However, if it has a companion star, then the white dwarf can steal its matter, and return to life. If they steal too much matter, the carbon atoms will fuse so rapidly that the burning cannot be stopped, leading to an explosion as a Type Ia supernova.

That has long been the leading theory, although proof has remained elusive for decades. One of the papers shows that the exploding star had to be smaller than a tenth of the radius of the sun. That rules out normal stars, and for the first time provides direct evidence that white dwarfs are responsible for Type Ia supernovae. The lead author is Peter Nugent, who discovered the supernova, and is a senior staff scientist at Lawrence Berkeley National Laboratory, and an adjunct professor at UC Berkeley.

Scientists have not yet ascertained the type of the companion star to the white-dwarf-turned supernova. However, they have ruled out the type of star they expected –– a red giant. Previous studies of RS Ophiuci, a binary star system in our own Milky Way galaxy that is similar to the one being studied, has a white dwarf near the limit that will cause it to explode. And, it is being fed by a companion red giant star. So scientists were somewhat surprised that they did not find a red giant next to the supernova that exploded in August.

A second paper regarding the companion star to the white dwarf was led by Weidong Li, a research scientist at the University of California, Berkeley. He explained: "This is the first time through direct imaging of the explosion site, we were able to rule out certain types of stars as the companion to a Type Ia supernova. The second star couldn’t have been a massive red giant."

After decades of hunting the origins of Type Ia supernovae, scientists were finally able to make progress in this case for two reasons. In the case of the Li paper, it is because this was the closest thermonuclear supernova since sensitive modern instruments, like those on the Hubble Space Telescope, have been available.

In the Nugent paper, while closeness was necessary, another factor was even more important –– the speed of the discovery. The team discovered the supernova only 11 hours after it exploded, allowing for the first estimate of the size of the star when it blew up. "Not only is this the closest Type Ia supernova in the last 25 years, it is the youngest and brightest ever discovered in the digital age," said Nugent. "Observations with ground- and space-based telescopes from the radio through X-ray wavelengths have provided unprecedented constraints on how the supernova exploded."

The scientists noted that these rapid observations were not due to luck; they were possible because the Palomar 48-inch telescope, which was used to discover the supernova, is effectively a robot. Given regions of the sky to scan, Palomar 48 observes all night long without a human driving it. The data are then automatically processed by computers, and new potential supernovae are presented to the discovery team when they wake up.

In fact, LCOGT is building a global network of telescopes to take this idea to the next level. "If you have telescopes spread out in longitude, it is always dark somewhere, so you can observe targets around the clock," said Howell. "We like to say that the sun will never rise on the LCOGT empire."

LCOGT already has telescopes in Haleakala, Hawaii, and Siding Spring, Australia, as well as at the Sedgwick reserve near Santa Ynez, Calif. In 2012 it will expand to Texas, Chile, and South Africa. Last August, astronomers at LCOGT were able to use the fledgling network to monitor the brightness of the supernova as it rose in the weeks after explosion.

To add to the robotic data, B.J. Fulton, a recent UCSB graduate and astronomer at LCOGT, remotely controlled the 0.8-meter Byrne Observatory Telescope at the Sedgwick Reserve from his home in Santa Barbara 35 miles away. "As soon as I got word of the young supernova from the PTF collaboration I knew that this was a rare opportunity," said Fulton. "I immediately slewed the telescope to M101 and monitored the supernova nearly every night for the next two months. We’re still in the process of automating the Sedgwick telescope, so I operated it remotely, but in the future observations like this will happen automatically, as they did at our telescope in Hawaii."

When the supernova reached its peak brightness, Fulton used the Byrne Observatory to take a series of shots, which he composed to make an image that is as aesthetically pleasing as it is scientifically useful. "This is the supermodel of supernovae," said Howell. "The image B.J. created of SN 2011fe is the most beautiful image ever of a thermonuclear supernova and its host galaxy. And the fact that he did it with a modest 0.8-meter telescope is incredible. The previous poster child for type Ia supernovae, SN 1994D, was obtained with the Hubble Space Telescope. This image will be in all the textbooks."

Aside from Bildsten, Fulton, and Howell, other Santa Barbara contributors to the findings include Federica Bianco, Benjamin Dilday, Melissa Graham, and David Sand with UCSB and LCOGT; and Jerod Parrent with LCOGT.

The Nature articles follow on the heels of the December 10 presentation of the Nobel Prize in physics to three astrophysicists. This Nobel Prize recognized the scientists for the discovery that the universe is accelerating its expansion, a finding that they made using type Ia supernovae as a measuring tool, as "standard candles."