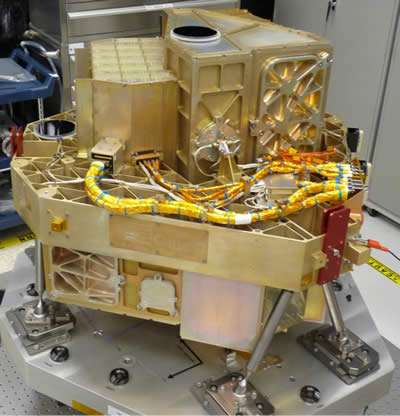 Greenbelt, MD-(ENEWSPF)- The second of four main instruments to fly aboard NASA’s James Webb Space Telescope (Webb) has been delivered to NASA. The Fine Guidance Sensor (FGS) will enable the telescope to accurately and precisely point at the correct, intended objects for it to observe. The FGS is packaged together as a single unit with the Near-Infrared Imager and Slitless Spectrograph (NIRISS) science instrument.

FGS/NIRISS arrived at NASA’s Goddard Space Flight Center in Greenbelt, Md., July 30. It has been undergoing inspection before post-delivery testing and then integration into Webb’s science instrument payload known as the Integrated Science Instrument Module (ISIM).

"This is an exciting event," said Scott Lambros, Webb telescope Instrument Systems Manager at NASA Goddard. "The FGS instrument is part of the integrated control system that performs the extremely fine pointing and stability needed for the Observatory; while the NIRISS instrument will provide great science and new discovery space. This milestone is the culmination of many years of hard work by our Canadian partners. We have had great cooperation between the FGS team and the Webb telescope team and look forward to continued cooperation integrating the instrument into the ISIM and Observatory."

The Canadian Space Agency (CSA) developed the Webb’s Fine Guidance Sensor and the Near-Infrared Imager and Slitless Spectrograph. The FGS will direct the telescope precisely, allowing it to study stars and planets forming in other stellar systems. Both were designed, built and tested by COM DEV International in Ottawa and Cambridge, Ontario, Canada with technical contributions from the University of Montréal and the National Research Council Canada, and scientific guidance of the FGS science team.

"Imagine the challenge at hand here: design and deliver technology capable of unprecedented levels of precision to conduct breakthrough science on board the largest, most complex and most powerful telescope ever built," said Steve MacLean, President of the CSA, Longueil, Quebec, Canada.

The FGS consists of two identical cameras that are critical to Webb’s ability to "see." Their images will allow the telescope to determine its position, locate its celestial targets, and remain pointed to collect high-quality data. The FGS will guide the telescope with incredible precision, with an accuracy of one millionth of a degree of angle.

Although the NIRISS is packaged with the FGS, it is functionally independent. NIRISS provides unique capabilities that will aid in finding the earliest and most distant objects in the Universe’s history. It will also peer through the glare of nearby young stars to unveil new Jupiter-like exoplanets. It will have the capability of detecting the thin atmosphere of small, habitable, Earth-like planets and determine its chemical composition to seek water vapor, carbon dioxide and other potential biomarkers such as methane and oxygen.

The most powerful space telescope ever built, Webb is the successor to NASA’s Hubble Space Telescope. Webb’s four instruments will reveal how the universe evolved from the Big Bang to the formation of our solar system. Webb is a joint project of NASA, the European Space Agency and the Canadian Space Agency.