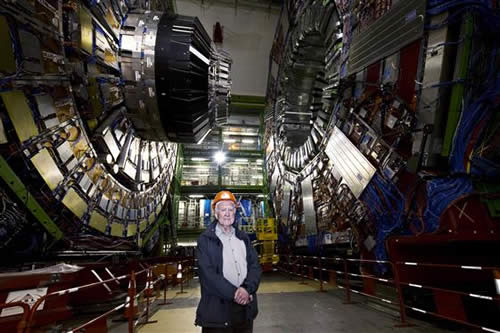 CERN-(ENEWSPF)- British researchers from the Large Hadron Collider at CERN have today (4th July 2012) confirmed that they have found a new particle consistent with the long-sought Higgs Boson. Speaking in London, Professor John Womersley of STFC confirmed the news.

These results mark a significant breakthrough in our understanding of the fundamental laws that govern the Universe.

At a seminar held at CERN, the European Particle Physics Laboratory, this morning, the ATLAS and CMS experiments presented their latest results in the search for the Higgs particle. Both experiments see strong indications for the presence of a new particle in the mass region around 125- 126 GeV.

“I’m delighted that we have indeed discovered a particle consistent with the Higgs boson! These results mark a significant breakthrough in our understanding of the fundamental laws that govern the Universe. Obviously having found a new particle, there is still much, much more to do at the LHC – we need to confirm that this new particle is the reason some particles have tangible mass while others are insubstantial, as proposed by Peter Higgs and other scientists, who predicted that a particle like this one must exist for our current understanding of the Universe to work.”

Thanks to the results coming from the two experiments, ATLAS and CMS, these preliminary findings appear to show a dramatic 5 sigma signal. If this is indeed a new particle, then it must be a boson and it would be the heaviest such particle ever found.

Speaking of the findings the Minister for Universities and Science David Willetts said:

“This news from CERN is a breakthrough in world science. The UK has made an enormous contribution over the last 20 years supporting the search for the Higgs Boson. Our researchers, universities and industry partners have been instrumental in making the Large Hadron Collider such a success. They deserve recognition for their contribution to this scientific milestone that will change the way we look at the universe from now on. And of course Professor Higgs of Edinburgh University has now secured his place in history.”

The UK is a world leader in particle physics and has played a central role in this research, from the theorists who formulated the model known as the Higgs mechanism, to the engineers and scientists who have designed, built and exploited the LHC – one of the most complex scientific instruments ever built.

Professor Tom Kibble CBE FRS, Emeritus Professor of Theoretical Physics at Imperial University was one of the key people involved in proposing that the ‘Higgs’ boson existed. He said:

"It is very exciting to find that work I was involved in nearly fifty years ago is once more at the centre of attention. At the time, the Higgs boson did not seem a very significant feature of the theory, but it has become so as the last missing piece of the ‘standard model’. Its discovery will complete a chapter, but not the story — the model is amazingly successful, but many features remain to be explained."

“We have reached a milestone in our understanding of nature,” said CERN Director General Rolf Heuer. “The observation of a particle consistent with the Higgs boson opens the way to more detailed studies, requiring larger statistics, which will pin down the new particle’s properties, and is likely to shed light on other mysteries of our universe.”

The next step will be to determine the precise nature of the particle and its significance for our understanding of the universe. Are its properties just as expected for the Higgs boson predicted in 1964, the final missing ingredient in the Standard Model of particle physics? Or is it something more exotic? The Standard Model describes the fundamental particles from which we, and every visible thing in the universe, are made, and the forces acting between them. All the matter that we can see, however, appears to be no more than about 4% of the total. A more exotic version of the Higgs particle could be a bridge to understanding the 96% of the universe that remains obscure.

“It’s hard not to get excited by these results,” said CERN Research Director Sergio Bertolucci. “ We stated last year that in 2012 we would either find a new Higgs-like particle or exclude the existence of the Standard Model Higgs. With all the necessary caution, it looks to me that we are at a branching point: the observation of this new particle indicates the path for the future towards a more detailed understanding of what we’re seeing in the data.”

The results presented today are labelled preliminary. They are based on data collected in 2011 and 2012, with the 2012 data still under analysis. Publication of the analyses shown today is expected around the end of July. A more complete picture of today’s observations will emerge later this year after the LHC provides the experiments with more data.

Positive identification of the new particle’s characteristics will take considerable time and data. But whatever form the Higgs particle takes, our knowledge of the fundamental structure of matter is about to be enriched.

The STFC pays the UK contribution to the CERN budget as well as supporting UK participation in the four LHC experimental detector projects, including the Higgs boson detectors ATLAS and CMS. This investment, along with the more than 200 UK nationals employed by CERN and nearly 600 UK scientists regularly working at CERN has been a major contributor in enabling us to announce this discovery today.