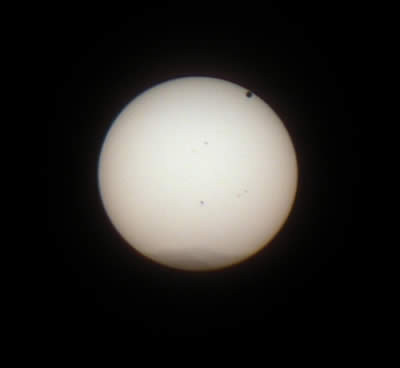 The Transit of Venus of 6 June 2012, as seen from Wiltshire in the UK. Image: Grant Privett

Astronomical Observatory of Trieste-(ENEWSPF)- On 6 June 2012 Venus passed directly between the Earth and the Sun, in a so-called transit where the planet appears as a silhouette against the solar disk, something that will not happen again until 5 December 2117. A team of Italian astronomers led by Paolo Molaro of the Instituto Nazionale di Astrofisica at the University of Trieste used the opportunity to perform an unusual and challenging experiment, looking at the sunlight reflected off the Moon (‘moonlight’) to see how it changed during the transit. This technique could help scientists to find planets in orbit around other stars. The team publish their results in the journal Monthly Notices of the Royal Astronomical Society: Letters published by Oxford University Press.

When Venus passes in front of the Sun it hides a part of our star’s rotating surface. Because of rotation, the spectrum of the Sun (created splitting the different colours of light using a spectrograph) is slightly different on each side. On one side, the solar surface is rotating towards the observer and so its light will be ‘blueshifted’, meaning the lines seen in a spectrum move towards shorter wavelengths. On the other, the surface is rotating away from the observer, so its light is ‘redshifted’, meaning that the lines move towards longer wavelengths.

By looking at the reflected light from the lunar surface, this is averaged out as a broadening of the various lines. When Venus moves in front of the Sun from east to west, it first blocks out the surface moving towards us and then the surface moving away from us. This causes a distortion in the spectral lines known as the "Rossiter-McLaughlin effect".

The astronomers realised that the High Accuracy Radial Velocity Planet Searcher (HARPS) spectrograph installed on a 3.6m telescope at La Silla in Chile, part of the European Southern Observatory (ESO), would be sensitive enough to detect the effect and that the Moon would be in the right place too. The Moon was slightly ahead of the Earth in its orbit, so ‘saw’ the transit a couple of hours later than terrestrial observers. This also meant that the Moon was in the night time sky in Chile, making it possible for the La Silla telescope to operate safely and observe the change in the solar spectrum.

Distortions in the spectral lines resulting from the Rossiter-McLaughlin effect are extremely small and are equivalent to a 3km / hour shift in the observed motion of the Sun. It has been seen before, in binary systems where the two stars eclipse each other. But it becomes more and more difficult to observe when the celestial body is a planet and rather than being the size of Jupiter is similar in size to the Earth, as Venus is. Scientists should nonetheless be able to measure the extent of this weak effect on the light from other planetary systems using telescopes such as the European Extremely Large Telescope (E-ELT) now under development. With the technique it should be possible to characterise important features of these systems and thus improve our understanding of the formation of planets in general.

Team member Lorenzo Monaco from ESO describes how important HARPS was in their work. "The measured magnitude of the Rossiter-McLaughlin effect is comparable to being able to track the speed of a person walking at a slow pace at a distance of 150 million kilometres, the space that separates us from the Sun. Nowadays there are very few instruments capable of recording such tiny changes, especially if you only have a few hours to measure them".

"There is close agreement between our work and the theoretical models", says Mauro Barbieri, from University of Padua, who is also a member of the team. "Among other things, this change in velocity is comparable with that due to the natural expansion and contraction of our star. Our observations however have allowed us to clearly see the Rossiter-McLaughlin effect during the transit".

"This measurement", says Paolo Molaro "shows the sensational results that spectrographs on telescopes like E-ELT will be able to deliver. We will open a new horizon in the study of the other Earth-like planets that are almost certainly waiting to be found around other stars in our galaxy".