ANN ARBOR, Mich.–(ENEWSPF)–April 1, 2013.  Men with an inherited genetic condition called Lynch syndrome face a higher lifetime risk of developing prostate cancer and appear to develop the disease at an earlier age, according to a new study led by researchers at the University of Michigan Comprehensive Cancer Center. 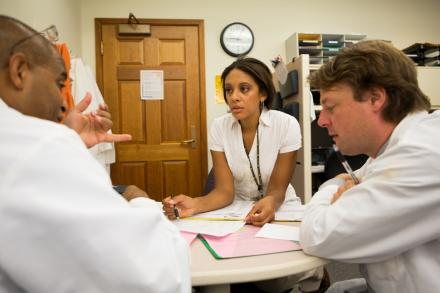 Lynch syndrome is an inherited condition linked to a higher risk of several types of cancer. People with Lynch syndrome have up to 80 percent lifetime risk of colorectal cancer and are also more likely to develop endometrial, gastric, ovarian, urinary tract, pancreatic and brain tumors. Overall, about 1 in 440 people are carriers for the genetic mutation, making it one of the most common inherited cancer conditions.

The findings in prostate cancer have implications for screening younger men who may be at higher risk of the disease. Recent guideline recommendations advise against prostate cancer screening in men younger than 75 who do not have any symptoms.

The researchers looked at 198 families who have a strong family history of cancer and were enrolled in registries at the University of Michigan Comprehensive Cancer Center or at Dana Farber Cancer Institute. These family registries included 4,127 men who were included in this analysis.

Results of the study appear online in the Journal of Clinical Oncology.

Earlier studies have suggested that Lynch syndrome might play a role in inherited prostate cancer, but studies to date have been controversial.

The current study uses a more rigorous statistical analysis and pulls from a larger number of people. This same method has previously linked Lynch syndrome to endometrial cancer and pancreatic cancer.

Prostate cancer statistics: 238,590 Americans will be diagnosed with prostate cancer this year and 29,720 will die from the disease, according to the American Cancer Society