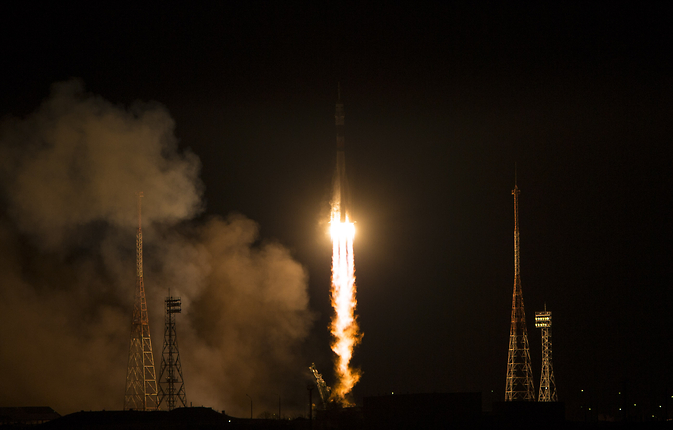 Terry Virts of NASA, Soyuz Commander Anton Shkaplerov of the Russian Federal Space Agency (Roscosmos) and Samantha Cristoforetti of the European Space Agency launched from the Baikonur Cosmodrome in Kazakhstan about six hours earlier at 4:01 p.m. (3:01 a.m. Monday in Baikonur).

Hatches between the two spacecraft are scheduled to open at about 11:30 p.m., with NASA Television coverage starting at 11 p.m.

The arrival of Virts, Shkaplerov and Cristoforetti returns the space station’s crew complement to six. The three join Expedition 42 Commander Barry Wilmore of NASA, as well as Flight Engineers Alexander Samokutyaev and Elena Serova of Roscosmos. They have been aboard the station since September.

The crew members will be working off the Earth, for the Earth conducting hundreds of scientific investigations and technology demonstrations during their six-month sojourn on the orbiting laboratory. These include observations of the genetic makeup of roundworms, examining aerosols in the atmosphere and levitating cooling liquid metals.

One new investigation will look at epigenetics, which means “outside the genes,” or changes that can be inherited for several generations without affecting an organism’s basic DNA. This Japan Aerospace Exploration Agency study may help determine whether the effects of microgravity are transmitted from one cell generation to another without changing the basic DNA of an organism. Researchers study millimeter-long roundworms, C. elegans, as models for larger organisms. In this investigation, four generations of the worms will be grown aboard the space station, with adults from each generation preserved for later study on Earth.

The Electromagnetic Levitator (EML) suite of material science research investigations examines the effects of microgravity on various material properties. The EML acts as a furnace capable of levitating and heating metals up to 3,632 degrees Fahrenheit. Having such a facility in microgravity will allow scientists to observe the fundamental physical processes that occur as liquid metals cool. A potential outcome from EML research is the development of lighter, higher-performing alloys – mixtures of two or more metals or a metal and another material – for use on Earth and in space travel.

Being delivered to the station during Expedition 42 on the fifth SpaceX commercial resupply mission in December will be NASA’s second Earth-observing instrument, which will be mounted to the station’s exterior. The Cloud-Aerosol Transport System (CATS), will examine the location, composition and distribution of aerosols — particles that compose haze, dust, smoke and air pollutants — in the atmosphere. Aerosols can affect climate, airplane safety and human health. The CATS instrument measures aerosols using a laser-based system called lidar. CATS joins NASA’s first Earth science instrument launched to the station in September. The ISS-RapidScat instrument measures ocean winds around the world, data that are already being used to improve weather and marine forecasting and hurricane monitoring.

Expedition 42 will continue to take advantage of the orbital lab’s unique microgravity environment and expand the scope of research. The crew will perform experiments that cover human research, biological and physical sciences, technology development and Earth observations, as well as engage in educational activities. They are scheduled to greet a host of cargo spacecraft during their mission, including a number of commercial resupply flights, two Russian Progress resupply missions and the departure of the final European Automated Transfer Vehicle cargo spacecraft. The crew will conduct as many as three U.S. spacewalks.

Wilmore, Samokutyaev and Serova will return home in March 2015. At that time, Virts will become commander of the station for Expedition 43. Virts, Shkaplerov and Cristoforetti will return to Earth in May 2015.

The International Space Station is a convergence of science, technology and human innovation that demonstrates new technologies and makes research breakthroughs not possible on Earth. The space station has had continuous human occupation since November 2000. In that time, it has received more than 200 visitors and a variety of international and commercial spacecraft. The space station remains the springboard to NASA’s next great leap in human space exploration.

For more information about the International Space Station, visit: http://www.nasa.gov/station