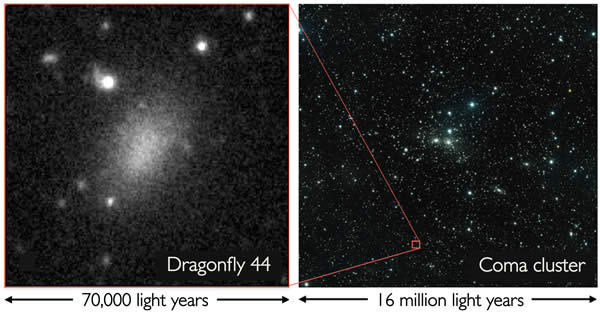 A collection of unidentified blobs was discovered toward the Coma cluster of galaxies, using the Dragonfly Telephoto Array. One of these puzzling objects, Dragonfly 44, was studied in detail using the Keck Observatory and confirmed as an ultra-diffuse galaxy. Even though it is 60,000 light years across, It is so far away that it appears as only a faint smudge. CREDIT: P. VAN DOKKUM, R. ABRAHAM, J. BRODIE

Maunakea, Hawaii-(ENEWSPF)-An international team of researchers led by Pieter van Dokkum at Yale University have used the W. M. Keck Observatory to confirm the existence of the most diffuse class of galaxies known in the universe. These "fluffiest galaxies" are nearly as wide as our own Milky Way galaxy – about 60,000 light years – yet harbor only one percent as many stars. The findings were recently published in the Astrophysical Journal Letters.

“If the Milky Way is a sea of stars, then these newly discovered galaxies are like wisps of clouds”, said van Dokkum. “We are beginning to form some ideas about how they were born and it’s remarkable they have survived at all. They are found in a dense, violent region of space filled with dark matter and galaxies whizzing around, so we think they must be cloaked in their own invisible dark matter ‘shields’ that are protecting them from this intergalactic assault.”

The team made the latest discovery by combining results from one of the world’s smallest telescopes as well as the largest telescope on Earth. The Dragonfly Telephoto Array used 14-centimeter state of the art telephoto lens cameras to produce digital images of the very faint, diffuse objects. Keck Observatory’s 10-meter Keck I telescope, with its Low Resolution Imaging Spectrograph, then separated the light of one of the objects into colors that diagnose its composition and distance.

Finding the distance was the clinching evidence. The data from Keck Observatory showed the diffuse "blobs" are very large and very far away, about 300 million light years, rather than small and close by. The blobs can now safely be called Ultra Diffuse Galaxies (UDGs).

“If there are any aliens living on a planet in an ultra-diffuse galaxy, they would have no band of light across the sky, like our own Milky Way, to tell them they were living in a galaxy. The night sky would be much emptier of stars,” said team member Aaron Romanowsky, of San Jose State University.

The UDGs were found in an area of the sky called the Coma cluster, where thousands of galaxies have been drawn together in a mutual gravitational dance. “Our fluffy objects add to the great diversity of galaxies that were previously known, from giant ellipticals that outshine the Milky Way, to ultra compact dwarfs,” said University of California, Santa Cruz Professor Jean Brodie.

“The big challenge now is to figure out where these mysterious objects came from,” said Roberto Abraham, of the University of Toronto. “Are they ‘failed galaxies’ that started off well and then ran out of gas? Were they once normal galaxies that got knocked around so much inside the Coma cluster that they puffed up? Or are they bits of galaxies that were pulled off and then got lost in space?”

The key next step in understanding UDGs is to to pin down exactly how much dark matter they have. Making this measurement will be even more challenging than the latest work.

The Low Resolution Imaging Spectrometer (LRIS) is a very versatile visible-wavelength imaging and spectroscopy instrument commissioned in 1993 and operating at the Cassegrain focus of Keck I. Since it has been commissioned it has seen two major upgrades to further enhance its capabilities: addition of a second, blue arm optimized for shorter wavelengths of light; and the installation of detectors that are much more sensitive at the longest (red) wavelengths. Each arm is optimized for the wavelengths it covers. This large range of wavelength coverage, combined with the instrument’s high sensitivity, allows the study of everything from comets (which have interesting features in the ultraviolet part of the spectrum), to the blue light from star formation, to the red light of very distant objects. LRIS also records the spectra of up to 50 objects simultaneously, especially useful for studies of clusters of galaxies in the most distant reaches, and earliest times, of the universe.

Keck Observatory is a private 501(c) 3 non-profit organization and a scientific partnership of the California Institute of Technology, the University of California and NASA.