Most Americans Oppose Tough Negotiating Tactics Such As Ending Cost-Sharing Reduction Payments, but Most Republicans and Trump Supporters Favor Such Strategies; Most Republicans Are “Disappointed” But Not “Angry” That Repeal-and-Replace Legislation Did Not Pass Senate

CALIFORNIA—(ENEWSPF)–August 11, 2017.  After the Senate’s failure to pass legislation to repeal and replace the Affordable Care Act, the latest Kaiser Health Tracking Poll finds that eight in 10 Americans (78%) say President Trump and his administration should do what they can to make the current health care law work.

This includes large majorities of Democrats (95%) and independents (80%), as well as about half of Republicans (52%) and President Trump’s supporters (51%). A much smaller share of the public (17%), including four in 10 Republicans (40%) and Trump supporters (39%), say the President and his Administration should do what they can to make the law fail so they can replace it later.

This finding and others from the poll suggest that most of the public is ready for Washington to move beyond the repeal-and-replace debate and instead focus on fixing shortcomings in the Affordable Care Act. For example:

This month’s survey again finds more of the public holding a favorable view of the Affordable Care Act than an unfavorable one (52% vs. 39%). Favorable views have increased 9 percentage points since the 2016 presidential election, with the trend occurring among Democrats, independents, and Republicans. 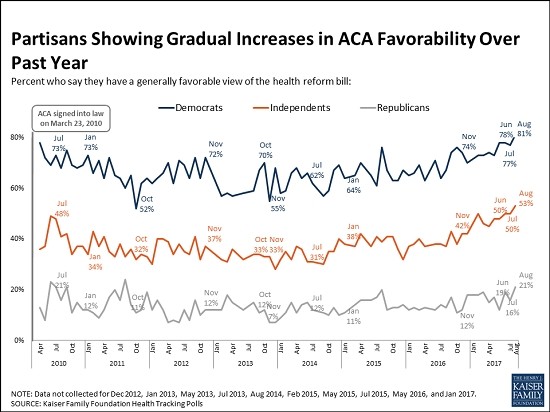 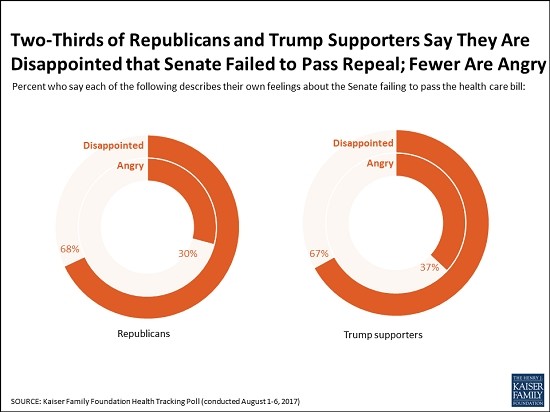 This month’s survey also probes the public’s views about the Affordable Care Act’s insurance marketplaces, which allow Americans who don’t get insurance through their employer to shop for and purchase insurance, with tax credits available to low- and moderate-income customers.

Even though only about 10 million people receive coverage through the marketplaces, most (60%) Americans believe that their family will be negatively affected by rising premiums in the marketplaces, twice the share (31%) who say it would have no impact.

Designed and analyzed by public opinion researchers at the Kaiser Family Foundation, the poll was conducted from August 1 – 6 among a nationally representative random digit dial telephone sample of 1,211 adults. Interviews were conducted in English and Spanish by landline (428) and cell phone (783). The margin of sampling error is plus or minus 3 percentage points for the full sample. For results based on subgroups, the margin of sampling error may be higher.