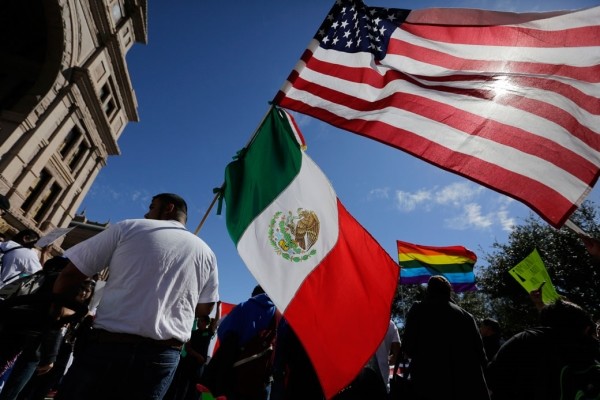 A man hold the U.S. and Mexico flags during an immigration protest in Austin, Texas, February 16, 2017. AP/Eric Gay

Washington, D.C. —(ENEWSPF)–May 2, 2017.  The economic and security relationship between the United States and Mexico is one of the most important for both countries. A stable and vibrant Mexico is good for the United States. Unfortunately, one of the biggest threats to that security and stability on both sides of the border is the high level of violence in Mexico over the past decade.

The Center for American Progress has released a report looking at the interconnectivity of the U.S.-Mexico relationship and how the uncontrolled flow of guns from the United States into Mexico has contributed to increases in violence. It offers recommendations that both nations can implement to secure the rule of law in Mexico and reduce gun trafficking.

“Violence is one of the biggest hurdles facing security and stability in Mexico,” said Eugenio Weigend Vargas, Senior Policy Analyst for the Guns and Crime Policy team at CAP. “That violence is fueled in part by the easy access to U.S. guns made possible by lax gun laws. For the United States and Mexico to quell this violence, Mexico must focus on improving the rule of law on its side of the border, while the United States should beef up firearm trafficking prevention measures such as closing loopholes around background checks and increasing penalties for straw purchases.”

The economic relationship between the United States and Mexico has grown significantly since the mid-1990s, with total trade between the two nations reaching more than half a trillion dollars per year by 2015. Unfortunately, the United States is the largest consumer of Mexican drugs, providing cartels with $64 billion per year. The violence of the past ten years has been fueled by the cartel’s easy access to U.S. guns.

While Mexico must unilaterally implement reforms to improve its rule of law, the United States can aid in reducing violence on both sides of the border by closing gaps in U.S. law that contribute to the illegal flow of guns across the southern border. Among them is the loophole in federal law allowing private gun sellers to sell without background checks at gun shows, online, or at other venues. Requiring background checks has been proven to reduce illegal gun trafficking in the United States, and states that have closed this loophole have substantially lower rates of trafficking to Mexico as well. Also among the recommendations are the reporting of multiple gun purchases by the same individual and increased penalties for straw purchases—where someone knowingly purchases a gun for someone prohibited from purchasing one.