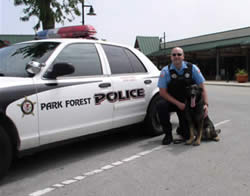 Park Forest, IL—(ENEWSPF)— Police responded to Vollmer Avenue, East of Cicero Avenue to assist Matteson Police Department with a K-9 track. A Matteson officer told police an armed robbery had just occurred at the Radio Shack Store in Matteson. The suspect allegedly told employees he had a gun. The vehicle the suspect drove was pursued by Matteson officers to the area of Cicero Avenue and Vollmer Road.

The suspect drove the vehicle into the woods of the Vollmer Forest Preserve and then fled the vehicle. Park Forest Police used the driver side of the vehicle and a backpack found inside for scent for the dog. The backpack had been used during the robbery and contained the proceeds from the store.

The K-9 track led to a large set of bushes where police found the suspect lying face down under the bushes.  "We caught him napping," said Officer Lee Elliot, whose K-9 partner Brix tracked the suspect.  Elliot said the suspect was sleeping, well-hidden, "It looked like he had been there a while and fell asleep."

The suspect provided a name to the officers and was arrested. While still at the scene, officers were informed the suspect vehicle had been stolen in Chicago, per the Chicago Police Department.

According to an update to this police report added today by Officer Elliot, the subject taken into custody in this incident was later identified with fingerprints as Calvin Burke, 39, and that the name Burke originally provided was false.  Burke was later charged and processed by the Matteson Police Department with one count of aggravated robbery.  According to Officer Elliot, Burke is not being cooperative.  Matteson police have only been able to determine that he is out of Chicago.  Additional charges are possibly still pending by the States Attorneys Office, according to the report.

Park Forest, IL—(ENEWSPF)— Police were called to a house in the 100 block of Algonquin on May 7 in reference to found property, allegedly a grenade.  The officer spoke with a man who had been sent to the house to do some rehab work.  When the worker began taking apart the old drywall in the garage, he noticed several items in between the back wall of the garage and the wall studs.  He then removed these items from the wall and placed them on the front lawn of the residence and called 911.

All items were transported for disposal by the Cook County Bomb Squad.  The items were inventoried and placed in a secured metal locker.

Deputy Giachetti of the Cook County Bomb Squad said that these items were Vietnam War era and would be destroyed, according to the report.

Photo: Morguefile.com Park Forest, IL—(ENEWSPF)— Editor's Note: We continue our reporting on news from police reports.  Besides covering the many stories from … Read more 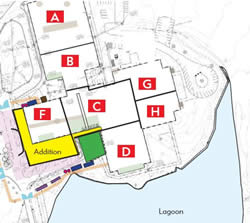 An illustration of the addition planned for Rich Central High School. No major additions are in the works for Rich East in … Read more

Faso Pizza is being forced to leave its present location after doing business in Park Forest for a total of 36 years. … Read more

Free Outdoor Shakespeare Festival On the Village Green Downtown, Park Forest June 22, 23, 24 Much Ado About Nothing Sponsored by the … Read more

Fort Worth, TX (PRWEB) May 23, 2007 — High-tech criminals now have a new way to take advantage of Americans' dependence on … Read more