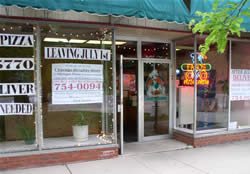 Faso Pizza is being forced to leave its present location after doing business in Park Forest for a total of 36 years. (Photo: ENEWSPF)

Park Forest, IL—(ENEWSPF)— Forced to close the doors of her store after 36 years total in town, business owner Laura Faso expressed her desire to keep Faso Pizza in Park Forest. eNews Park Forest interviewed Ms. Faso as a follow-up to a May 5 story, where we reported that Mrs. Lucy Bibbs informed owners of Tower Cleaners and Faso Pizza that they have until July 1st to move their businesses or pay taxes in addition to rent. Mrs. Bibbs is Executive Director of Exceptional Developmental Institute, Inc., the corporation that owns the plaza at the northwest corner of Blackhawk and Indianwood where the two businesses are located. Ms. Faso was unavailable for comment for the May 5 story.

“We were asked to leave because the plaza is trying to maintain their non-profit status,” Ms. Faso said, “It’s not our decision or our choice.  We would have been happy to stay.”

Commenting on Mrs. Bibbs proposal that the business stay at the current location but pay taxes, Ms. Faso said, “We rent.  It’s her responsibility to pay the taxes.”  Faso also disputes Mrs. Bibbs’ claim in the May 5 story that she pays the water bill, “We have had our own water bill since day one.  The only thing they’re responsible for is the exterior of the building, and anything on the interior is our responsibility.”

“They’ve always claimed to be a Christian organization.  He’s a reverend,” she added. Faso expressed her frustration in trying to contact Mrs. Bibbs, “But I don’t know anything.  She won’t answer the phone.  She never answers the phone.  We never get a straight answer.  We had certified mail come to us in December saying we had to go to court, and she claimed that it was an error in bookkeeping.  So, who do you believe?  So, we’ve been holding our breath all these months.”

Faso says the business has been in Park Forest for over 3 decades, “We’ve been here for 21 years, which makes it a total of 36 for Park Forest.  So, in no way were we ready to leave or wanting to leave, and we are working with the Village right now trying to find something else in the city of Park Forest, whether it will be in the Downtown center, or possibly by Family Video, maybe even in the Sterk’s plaza.” 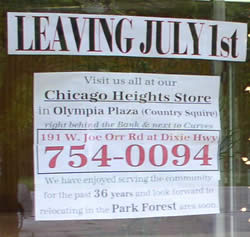 A sign in the window reads in part, “We have enjoyed serving the community for the past 36 years and look forward to relocating in the Park Forest area soon. (Photo: ENEWSPF)

Several times during the interview, Ms. Faso expressed her desire to remain in Park Forest, “so we can continue to serve the community, because it’s been 36 years, and we hate to just walk away. “  She says they see people come in who are adults now and have been coming to the Park Forest location since they were children. “We have wonderful customers here that have supported us throughout the years.”

“But what we want people to know is that we are not going out of business,” she said. “This is not our choice.  We have been asked to leave because of the landlord situation with back taxes owed and they’re trying to claim to be non-profit, and therefore they cannot have profit-making businesses in the plaza.”

Faso says she has looked at several locations in Park Forest, “It will probably be several months because all of the locations we’ve looked at are going to take further construction than we have originally believed.” So far she is pleased with the response she has received from officials in Park Forest, “They really are working hard.   “They are really trying to work with us.”

Costs to move the business are daunting, easily topping $107,000 for the move and final build-out, “That is a tremendous investment that is coming out of pocket.  That is money that we wouldn’t have to spend if we were still here.”

Still, she added, “We would stay here until the city collapses.  We have great customers.”

Resident Pam Moore, also present for the interview, says she has been coming to Faso’s  for over 20 years, “I’m here once a week, at least – my Sunday night mostaccioli with the Sopranos.”  She too hopes to see Faso Pizza reopen in town, “Keep the tax dollars in town,” she said.

Faso says they get a number of calls for Italian food every Sunday evening, just before the Sopranos airs.