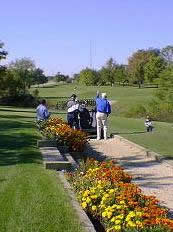 Discussion at the November 20 Village Board meeting focused on the proposed closing of Hidden Meadows Golf Course.  Speaking to a crowded board room, Village Manager Tom Mick outlined reasons for the resolution, "It's clearly based on financial reasons."  In addition, Mick said that the board met with residents from Tamarack Street in recent years, "Along the way we had done to research what the Village's obligations were for Hidden Meadows." "So we met in 2004, 2005, and, again in 2006 with those residents to keep them abreast of what discussion transpired and what the Village was looking at."

Mayor Ostenburg suspended the normal agenda to give people a chance to make comments about the golf course.  Public comments normally occur at the end of the board's deliberations at a Rules Meeting.

Pete Godfrey, golf official at Hidden Meadows for the past 20 years was the first to address the board.  He spoke of the popularity of instruction at the golf course,  “Over the past 20 years I’ve probably taught over 2,000 golfers.”  He reported that the course is now open less than it used to be, “I don’t know if the board knows this, but in the past couple of years, the hours of operation have decreased.  We used to be open 15 hours a day, from 7 a.m. to 10 p.m.  In the past few years we’ve had restricted hours.  Not once did we ever have lights this year to teach golf.  We are talking about 200 hours of operation that we’ve lost this year.  We did not have lights this year.  I was not able to teach until 9 o’clock."

Mr. Robert Marshall, Sr. inquired whether the question to close the golf course would be brought to the voters of Park Forest via referendum.   He also mentioned numerous comments he had heard from individuals unfavorable to closing the course.  Mayor Ostenburg responded, “The board had not planned to submit the item for referendum.  It’s not something that we would commonly submit for referendum.”  Responding to Mr. Marshall's remarks about residents making comments, he said, “In terms of the comments that I have received about the course closing, that they mostly have come from users of the golf course.  At least 50% – 60% of those have been non-residents who are not paying taxes.  And I think that’s the critical issue here we have is that there is $150,000 per year in terms of lost revenue is a burden on all of the tax payers.  A number of the people who don’t use the facility are paying for it.”

Another Tamarack Street resident, Mr. Robert T. Marshall, Jr., offered a compromise, “We’re suggesting that you add an amendment to that, that rather than sacrificing an important asset and in an endeavor to end the deficit in the budget, that the board consider closing the course for one year, maintain the course as open space, while a citizen’s group consider future use of [the course].”

Mr. Bob Boyer spoke in favor of keeping the course open, “I’ve played different courses, and quite a few of them are supported by a village or a Forest Preserve.  I still prefer my own Hidden Meadows.  It is a lovely course.  I am proud that Park Forest has a municipal golf course.”  He also expressed his concern that closing the golf course would have an adverse effect on property values, “When Park Forest gives up on Hidden Meadows, then my housing value goes down.”

Mr. James Stedt spoke to the issue of duplication, having two golf courses within such proximity to each other.  “University Golf Course is an excellent facility, they’ve done some wonderful renovations over there, but it’s not in the same league.  Hidden Meadows is a course for all people.  You don’t have to worry about who’s coming up behind you.  It’s a place where the game starts.”  He also encouraged the board to take a look closely at the possibility of closing the north course.  “When it was just the south course, the south course was bringing in a lot of money.”

After the public comments, Mayor Ostenburg asked staff to give responses on all of the suggestions made by residents, and that these be ready for the next board meeting.  “On behalf of the board members, I’ve watched this board agonize over this issue, and there have been individuals who have come and gone from the board who have also agonized over it, and we do try to take into consideration the residents who say they moved to Park Forest based on this.”