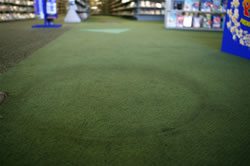 A circular indentation in the carpet is all that remained of Family Video’s gumball machine Saturday. A man allegedly stole the machine last Thursday. (Photo: Wendy Heise)

Park Forest, IL—(ENEWSPF)— Police are searching for a man who apparently doesn’t hesitate to take candy from a baby.  The investigation is still ongoing into the stolen gumball machine from Family Video on Sauk Trail. While the alleged thief may be after coins from the machine, however, all he got from Family Video was recently serviced machine full of gum and very little change.

Olympia Fields police had a theft of coin operated machine on the same date.  In that case, the suspect vehicle was a red Dodge with temporary plates 232J016, according to the report.

Police recovered the purple gumball machine and processed it for prints.  The incident at Family Video was also filmed on the store security tape.

Earlier the same day, the same suspect had allegedly attempted to exchange gumball machines at the Park Forest Currency Exchange on Orchard.  The suspect left when told to stop.

Commander Mel Dunnagan of the Park Forest Police Department related that he had spoken with the owner of the machines.  The owner was very upset the machine was stolen, saying he had just serviced it only 30 minutes prior to the alleged theft.  But servicing the machine meant the money was gone. In short, the thief got away with a machine full of gumballs, and not many coins at all.