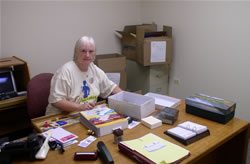 Park Forest, IL—(ENEWSPF)— The Health Department officially made the move to its new location in Village Hall last week. Staff members transported boxes and equipment to rooms that were no more than an unfinished basement several weeks ago.

In the midst of unpacking, Director Christine Blue said she was pleased with the progress, “We have all of our things moved to the new place.  Tomorrow we’ll begin the sorting.  Meanwhile, we are still delivering care to all of our homebound patients.  That’s the essential thing.  Public health nurses do this.  We deal with what we have."

She also had high praise for the department’s employees, “Our staff has outdone themselves.  Everybody worked hard.  We had people at one end sending, somebody at the other end receiving, and everything is exactly where it needs to be.”

Village Manager Tom Mick was also pleased that moving day had finally arrived, “The project has been a tremendous undertaking.  We’ve come a long way since the work started in May.  The Village looks forward to having an open house in the near future to celebrate the Health Department’s new home.”

The Park Forest Health Department serves residents of Park Forest and surrounding municipalities.  In 2006, the department served 531 residents from Richton Park, 281 from Matteson, 78 from Olympia Fields, and 59 from University Park. A total of 11,687 people visited last year and received service.

Below are three pictures of the foyer. The first was taken a few weeks ago, the second moving day, the last this past Saturday. 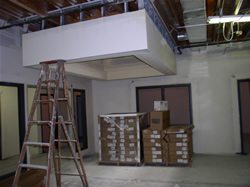 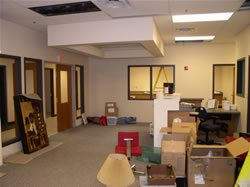 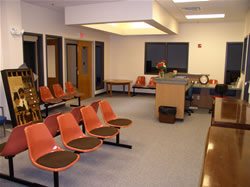