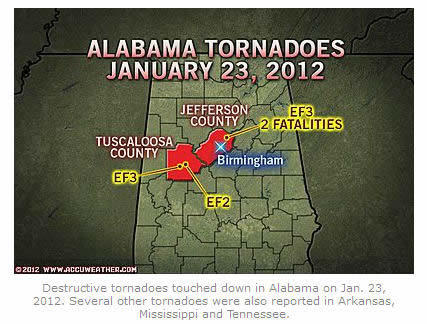 State College, PA-(ENEWSPF)- AccuWeather.com reports more than one round of thunderstorms producing tornadoes has already struck the South this January with the latest hitting the Deep South, and Alabama in particular, hard early this week.

Many people are asking whether tornadoes in January are rare and whether this is an indication of another bad year of severe weather.

One severe thunderstorm, known as a supercell thunderstorm to meteorologists, produced long-tracking tornadoes along its path across portions of Tuscaloosa and Jefferson counties in Alabama.

In Tuscaloosa County, Ala., EF-3 tornado damage was found in the Koffman area. Winds of the tornado were estimated to be 140 mph. Dozens of trees were uprooted, an outbuilding was destroyed, a barn was destroyed and the roof of a home was torn off.

The damage path was 0.46 of a mile long and as wide as 400 yards. Fortunately, there were no injuries or fatalities.

Another tornado that struck Tuscaloosa County, Ala., near Watermelon Road was determined to be an EF-2 with peak winds estimated at 115 mph.

The twister downed trees before moving on to a hunting camp, overturning eight campers. Three of the campers were destroyed, and another five sustained different levels of damage. When the tornado reached Watermelon Road, it snapped three wooden transmission lines.

The path of destruction was 0.56 of a mile long and as wide as 300 yards. Again, no one was hurt or killed by the tornado.

The hardest-hit community was Clay, Ala., in Jefferson County. The initial survey of the tornado damage found that the tornado was likely an EF-3 with estimated winds of 150 mph. Several homes were completely demolished with two deaths confirmed.

In the severe storm outbreak from this past Sunday into Monday, there was a total of 27 tornado reports. However, some of these reports were likely multiple sightings of the same tornado, so the actual number of tornadoes will be lower.

"Alabama, Mississippi and Georgia can have a severe weather season that starts as early as January," according to Expert Senior Meteorologist Dan Kottlowski.

These states are the heart of a zone referred to as "Dixie Alley," which spans from the Deep South to the Ohio Valley and is known as another hotspot for twisters besides "Tornado Alley."

"Thunderstorms commonly form when warm, humid air clashes with cooler, dry air. Since the Deep South gets plenty of humid air from the Gulf of Mexico, while getting drier air from the Plains, tornadoes can form," said AccuWeather.com Expert Senior Meteorologist Alex Sosnowski.

"Dixie Alley" is thought of as the only region of the country that has three severe weather seasons during the fall, winter and spring.

"However, it is still rare for multiple tornado outbreaks in January," pointed out Kottlowski.

"Deep cold air has not reached the Deep South yet, so the severe weather season is early," said Kottlowski.

Without cold reaching all the way into the Deep South, Gulf water temperatures are warm. Any time the wind turns out of the south, warm and humid air is easily drawn across "Dixie Alley." High humidity sets the stage for thunderstorms violent enough to produce tornadoes.

Unless deep cold air reaches the Southeast, there are probably going to be more early season severe weather outbreaks capable of producing tornadoes.

"The overall potential for tornadoes for 2012 looks the same as last year," stated Kottlowski. In 2011, there were above-normal tornadoes with a total of 1,725.

By Meghan Evans, Meteorologist for AccuWeather.com