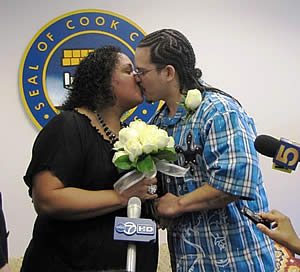 Jacqueline Cruz and Miguel Cruz have been a couple since being introduced by Miguel’s sister in 1997. While looking at old school photos, the couple learned they both attended the same elementary school (Pritzker, formerly Wicker Park) and high school (Clemente) but never met. The Cruzes, who have the same last name but were not related until they tied the knot, have two children: Jorge, 12, and Jacqueline, 9.

"We should have done this a long time ago," said the 34-year-old groom. "I’m in church now and I believe this is the right thing to do."

Clerk Orr, the only clerk in Illinois with the authority to perform marriages, has married every couple who obtains the first marriage license of the year since 1991.

"One of my favorite jobs as County Clerk is to start the year with a beautiful marriage," Orr said. "May their married life together be long and happy."

This year’s prizes include a complementary weekend for two at the Palmer House Hilton; a $50 gift certificate to Frankie’s Scaloppine, a Lettuce Entertain You restaurant; and two tickets to "God of Carnage," courtesy of the Goodman Theatre. La Salle Flower Shop in Chicago donated a bouquet of white roses and a boutonniere.