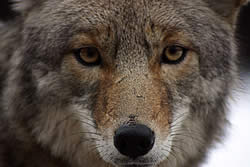 A coyote in Yosemite. (Stock.xchng)

Park Forest, IL–(ENEWSPF)– Several residents have reported seeing a pack of 3 coyotes in the west part of Park Forest near the border of Richton Park. Since the coyote is a very intelligent and adaptable animal, it is not unusual to spot them in urban and suburban areas. However, coyotes can pose a serious threat to your cat or dog.

Evidence that coyotes are living nearby is their nighttime chorus of howls, yips and barks. According to the Humane Society, unless they are causing a specific problem, the presence of coyotes should not be cause for alarm.

However, coyotes will kill free-roaming pets and have been known to raid gardens and garbage cans. Since Park Forest has many other nocturnal animals raiding our gardens and trash cans such as the raccoons, skunks, and deer, you shouldn’t assume that these issues are the direct result of coyotes. If you want to determine the nature of your yard damage or garbage can problems, sprinkle some flour, cornstarch, or other nontoxic powder on a hard surface near the area and check for footprints. If the footprint looks similar to Fido’s it’s likely a coyote doing the damage.

Most conflicts between humans and coyotes are easily avoided by following these simple suggestions, most of which will help to prevent conflicts with other wild species, as well:

People rarely intend to feed coyotes, but these animals are opportunistic and they will make use of any readily accessible supply of food, whether it’s in a pet bowl or a trash can. Unfortunately, when coyotes become accustomed to the sights and sounds of humans they begin to lose their natural fear – a risky proposition for any wild animal. Coyotes will not make a distinction between their ‘natural’ prey and the family cat or small dog, and there are some health concerns for humans and their companion animals since coyotes are known carriers of rabies, distemper and canine parvovirus.

The best way to solve wildlife problems is to prevent them – don’t let pets run loose and keep anything that could be used as a food source safely stored away.