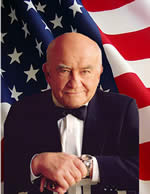 University Park, IL-(ENEWSPF)- Seven-time Emmy-Award winner Ed Asner will take the stage as President Franklin D. Roosevelt at Governors State University Center for Performing Arts on April 17, at 7 p.m. A representative confirmed that the 83-years-young star – who was treated for exhaustion during an event in Indiana just two weeks ago – will appear as scheduled in “Ed Asner as FDR.”

Asner, best known for his roles in TV’s “The Mary Tyler Moore Show,” and its spinoff, “Lou Grant,” plays President Roosevelt in a riveting solo performance drama that takes us through FDR’s White House years, including the Depression, the steps leading up to World War II, and the war years. When asked why he wanted to do this show, Asner, in his characteristic wit, said, “I wanted to get off my butt and do something!”

Patrons get to see and hear FDR’s fireside chats; his controversial packing of the Supreme Court, his personal life with Eleanor, his discreet but definite affair with Lucy Mercer, controversy surrounding the Pearl Harbor attack, and more details from his four-term presidency.

“FDR,” based on the original Broadway hit “Sunrise at Campobello,” the winner of four Tony Awards, by Dore Schary, plays for one night only at GSU Center. Tickets start at just $15, and range up to $55 for box seats. The majority of the seats are $40. High school students are just $10 since GSU wants to encourage teachers to bring their classes.

Also on stage this month, musician and songwriter Jim Witter performs in “The Piano Men” on April 11, at 7 p.m. This celebration of the music of the ’70s features classic hits from Billy Joel and Elton John, including “Rocket Man,” “Just the Way You Are,” “My Life,” and more. Witter’s versatility as an artist has brought him acclaim from industry executives and fans from the Canadian Country Music Association, Dove, and Juno Awards.

“The Piano Men” comes from Witter’s personal taste for ’70s music. “I was always a big fan of acoustic music, especially the folk artists of the ’70s – James Taylor and Harry Chapin,” Witter said. “But my real mentors were Billy Joel and Elton John.” This multi-media rock musical is a hit, receiving rave reviews from music critics all across North America. Tickets start at just $15, and range up to $45 for box seats. The majority of the seats are $30. 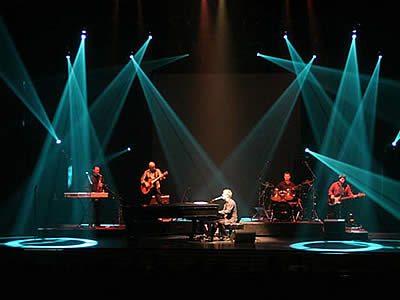 The end of April brings a revival for GSU – a spring production from its newly reinstated Theatre Program. Directed by GSU’s Dr. Patrick Santoro, “Anne Sexton’s Transformations” is a re-telling of Grimm’s fairy tales in the renowned author’s deliciously strange voice. The play features a cast of staff and students from GSU.

“’Transformations’ tackles important social, cultural, and political issues relevant to today’s world,” Dr. Santoro said. “Staging Sexton’s work at GSU makes a significant contribution to the university’s mission to prepare students for civic engagement during and after their studies.”

“Transformations” will be presented twice, on April 24 and 25 at 8 p.m. Tickets are just $10 and with patrons will be seated "in the round" on the stage, with performers up close.

To purchase tickets, or for further information, contact GSU Center’s box office at CenterTickets.net or call (708) 235-2222. The box office is open Monday through Saturday, from 10 a.m. to 4 p.m., and two hours prior to performances.