Firefighter/Paramedic Edward Wright Is Park Forest Firefighter of the Year 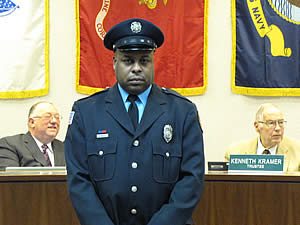 Park Forest, IL-(ENEWSPF)- Firefighter/Paramedic Edward Wright has been named Park Forest Firefighter of the Year. The award is presented to the Firefighter who best exemplifies by his/her performance the principles and purposes of the fire service and the Park Forest Fire Department. The award is open to all ranks of the Park Forest Fire Department. The Board, when considering nominees shall review the record of the nominee with special attention given to the preceding year. Such factors as performance as measured by evaluations and supervisors observations, attendance, appearance, dedication to duty and efforts toward self-improvement are considered.

Lieutenant Steven Bobzin read the citations, beginning with the one honoring FF/P Wright at a Village Board meeting earlier this month:

Firefighter/Paramedic Edward Wright has been a career member of the Park Forest Fire Department since November 26, 2001 and prior to that appointment served the Department as a member of the Paid-On-Call Division. Fire/Medic Wright began his full-time career as a Paramedic working for the City of Chicago where he honed many of his EMS skills.
His knowledge and abilities, supplemented by his street smarts, make him a great asset to our department. Fire/Medic Wright’s paramedic skills are well regarded by his peers and he is thought of as the paramedic I would want attending to me if I were acutely sick or injured. His EMS capability notwithstanding, Fire/Medic Wright is also very sound in his abilities on the fire ground. If a task is assigned to him the officer can rest assured it was completed and completed correctly with little or no supervision.

Fire/Medic Wright’s pride in his profession is frequently demonstrated each and every morning he shows up for work. His attention to detail even when performing routine equipment checks is in keeping with his focus that both he and the equipment he uses be ready for whatever the next call may bring. This attitude and focus permeates all of the assignments given to him by his superiors.

Fire/Medic Wright has silently become the shift mentor with the newer employees looking to him for guidance. His Shift Officer noted on a recent EMS call for a full arrest, he observed Fire/Medic Wright display this ability as he coached his partner through his first successful intubation. He went on to say that Fire/Medic Wright is always looking to improve himself and keep current on new skills and sets the standard for which all Park Forest Paramedics should strive.

A Life Saving Award was presented to Firefighter/Paramedics Taylor Bordewyk and Mark Cotrano. The citation follows:

On November 30, 2009 at 0737 hours Firefighter/Paramedics Taylor Bordewyk and Mark Cotrano responded in Ambulance 65 to 101 Main Street Apartment 229 where they found the occupant in cardiac arrest. Fire/Medics Bordewyk and Cotrano immediately requested additional assistance to the scene and began CPR and intubated the patient to establish an airway. Upon arrival of Firefighter/Paramedics William Brei and Cory Murdoch an IV was established and lifesaving drug therapy began. The patient was quickly transported to St. James in Chicago Heights where the combination of pre-hospital care and the efforts of the ER staff resulted in the reestablishment of a cardiac rhythm. This patient was later released from the hospital.

The efforts of this crew saved the patient’s life and the crew was recognized by the South Cook County Emergency Medical System with the presentation of an Outstanding Call Award and a Gold Seal to represent the pre-hospital save.

Firefighter/Paramedics Bordewyk, Cotrano, Brei and Murdoch’s devotion to duty is in keeping with the highest traditions of the Fire Service and reflect credit upon themselves, the Fire Department and the Village of Park Forest.

Chief and D/C approach recipients and stop just short of recipients; recipients come to attention and you read the citation:

On the evening of July 2, 2010 Detective Paul Morache along with Firefighter/Paramedics Tracy Natyshok and Robert Pillman responded to a report of a baby not breathing. Fire-Medic Pillman with Detective Paul Morache found a non-responsive, non-breathing three month old infant and quickly began life resuscitation efforts. Sensing the gravity of the call Fire-Medic Natyshok called for additional assistance From Engine 50’s crew of Fire-Medics Taylor Bordewyk, Mark Cotrano and Edward Dionne before joining in the resuscitation efforts.

As additional Fire-Medics arrived more advanced life support care including pediatric intraosseous needle insertion and drug therapy were performed and after several doses of medications the infant responded and the paramedic’s now had a viable pulse. The patient still did not have spontaneous breathing so the crew continued to support the infant’s breathing by means of a bag-valve-mask device. The ambulance crew transported the patient to the emergency room staff at St. James Hospital in Chicago Heights before being transferred to a tertiary care center.

The efforts of this Team exemplifies what the Park Forest Fire and Police Departments strives to provide everyday to the citizens of Park Forest. The efforts of this Team were recognized by the South Cook County Emergency Medical System with the presentation of an Outstanding Call Award and a Gold Seal to represent the pre-hospital save. Sadly, this child ultimately lost his life due to the injuries sustained.

Detective Morache and Firefighter/Paramedics Bordewyk, Cotrano, Dionne, Natyshok and Pillman’s devotion to duty is in keeping with the highest traditions of the Fire Service and reflect credit upon themselves, the Fire & Police Departments and the Village of Park Forest.

On the night of September 29, 2010 Firefighter/Paramedics William Brei and Cory Murdoch responded on a Mutual Aid call to assist the Richton Park Fire Department. Upon arrival, Fire/Medics Brei and Murdoch found the Richton Park crew providing assisted ventilations to a severe asthmatic patient in respiratory arrest.

Fire/Medics Brei and Murdoch quickly moved the patient to the ambulance and began advanced life support procedures including intubation of the patient to establish his airway, started an IV and initiated an in-line Albuterol drug therapy while assisting ventilations. Through their quick and decisive actions this patient maintained a pulse throughout the transport and was improving before they left the hospital.

The efforts of this crew saved this patient’s live and were recognized by the South Cook County Emergency Medical System with the presentation of an Outstanding Call Award and a Gold Seal to represent the pre-hospital save.

Firefighter/Paramedics Brei and Murdoch’s devotion to duty is in keeping with the highest traditions of the Fire Service and reflect credit upon themselves, the Fire Department and the Village of Park Forest.

Family members were present in the Board Room for the awards.