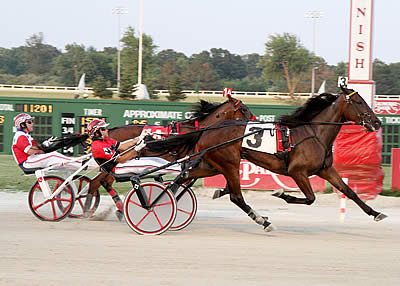 Anthonyskywalker and driver Kyle Wilfong made every call a winning one as the 2011 Hanover Stake season kicked off with the $31,700 for three-year-old colt trotters. (PHOTO SUPPLIED)

Crete, IL-(ENEWSPF)- The dream season for South Of The Tracks Racing’s Anthonyskywalker continued on Saturday night at Balmoral Park as the three-year-old gelding captured the $31,700 Hanover Stake over eight rivals in 1:55.1.

Kicking off the 2011 Hanover season the gelded son of Powerful Emotion-Queen Jamie stormed right to the top from post position three for driver Kyle Wilfong.

Unchallenged through an opening quarter in 28.1 Anthonyskywalker was forced to kick it into high gear as a hard charging GJ Photo Victory (Marcus Miller) came calling just as the field reached the half-mile mark in 57.2

Moving around the far turn disaster struck for GJ Photo Victory as the gelding made an uncharacteristic break leaving Anthonyskywalker with a 2 ½ length lead as he trotted by the three-quarter-mile mark in 1:25.3.

Through the lane the Homer Hochstetler trainee continued to show the way. A fast closing Fox Valley Arrow (Casey Leonard) was starting to make things interesting though as he began to find his best stride after a ground saving journey. Audition (Dave Magee) and Fox Valley Illiad (Dale Hiteman) were also starting to make things interesting as they tried to rally from the back of the pack.

Gamely holding on to a diminishing advantage Anthonyskywalker dug in with all his might, managing to hold off the late challenge of Fox Valley Arrow to win by three-quarters of a length. Audition finished third, 2 ¼ lengths behind the winner.

Winless in 10 starts as a two-year-old Anthonyskywalker now boasts seven wins in eight starts this season with earnings of $51,170. For his career the speedy bay sports a bankroll of $74,777 for his connections. Dispatched as the 9-5 second choice Anthonyskywalker returned $5.60, $2.60, $2.10.

State-bred pacers were also in action on Saturday night as a field of eight three-year-old colts and geldings met in the co-featured $9,000 Hot Head Stake.

Cruising along comfortably on the “engine” the Kris Reynolds trainee rumbled through splits of 28.0, 56.0 & 1:24.0 while unchallenged on the front end.

Through the stretch the long striding three-year-old continued to maintain a 1 ¾ length advantage while awaiting a challenge from one of his seven rivals. That challenge never materialized though as Rockin Rumble rolled under the finish line with his seventh win in 15 starts this season. Fox Valley Griffin (Jamaica Patton) shook loose to finish second while Fox Valley Yukon (Dale Hiteman) rallied from the back of the pack to finish third.