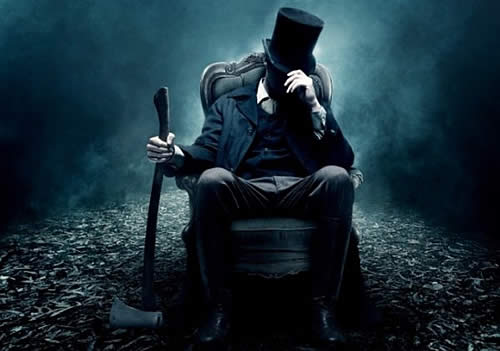 Farce works well if you play it fast, so the audience doesn’t notice the absurdity of the situation. Scratch out the word “farce,” replace it with “drama,” and you may not sum up the work of a lot of film directors, but you’ll certainly have Timur Bekmambetov pegged. Abraham Lincoln: Vampire Hunter has the same crazed, manic energy as we saw in his crazed, manic 2008 movie Wanted. That film led us on such a rushed, headlong journey, we didn’t have time to calculate the plausibility of firing a bullet whose trajectory is a curve, or the ability of someone to fire a gun from Hyde Park and kill someone standing on top of the Carbide and Carbon Building.

The mood here, however, is more somber than in Wanted, especially when the major conflict becomes clear, which is Lincoln vs….you know. And here is where I need to stop dead in my tracks and say that not everyone is going to like this movie (the rating on the Internet Movie Database is currently 6.4, which if ALVH were a test, it would be failing. I haven’t read Ebert yet, but I bet he liked it- he can cut through a lot of things in a movie that other people might object to, and assess the movie on its entertainment value. So what I’m trying to say is that you’re going to have to accept a fairly absurd situation, and just go with it. If you choose to. If you can.

The movie, whose screenplay was written by Seth-Grahame Smith, based on his own novel (and yes, Pride and Prejudice and Zombies is in development as we speak. I’m not kidding.), actually does a pretty good job of respecting history. I wanted to stand up and inform audiences during the trailer that the Washington Monument, depicted in the trailer, had not actually been built yet, but it was. It was halfway done by 1854, quite a bit before the Civil War. Anyway, as seen in many historical epics and biopics, the movie is a bit stodgy at the beginning, but once Lincoln accepts his calling it begins to take off, and achieves a racing pace by the time he becomes President.

Along with  Bekmambetov’s total commitment to the absurdity of the situation, what really works is the performance of Benjamin Walker, who has already had presidential experience, playing the title role in Bloody Bloody Andrew Jackson on Broadway. Like the director, the actor fully embodies the part of Lincoln, reality and the wildly non-historical facets of Lincoln in equal measure. The character progresses just as it would in any Lincoln movie devoid of vampires, and that makes the absurd stuff acceptable.

As a boy, Lincoln witnesses his father’s employer Jack Barts, beating Abraham’s young black friend. Lincoln’s father intercedes, but the man fires him, and that night, Lincoln sees him briefly by his mother’s bed. The next day Mrs. Lincoln is sick, and soon dies. Abraham blames  Jack Barts for her death, and as he grows older, readies himself for the day he will avenge his mother, unaware of Bart’s true nature. Walker somehow convinces us that this would be a righteous kill, and despite the images and connotations of gentleness we’ve grown up with, we accept this “flaw” in Lincoln.

A man named Henry Sturgess approaches Lincoln, and asks him if he knew what a vampire is, and Lincoln dismisses the idea. Sturgess then tells Lincoln about vampirism, convinces him that the young man must destroy all the vampires in Springfield.Once he has killed all the creatures on Henry’s list, he will then be able to find and kill Barts. There is, believe it or not, a vampire-slayer training montage, where the hero, acknowledging that firearms are not his weapon of choice, learns to use something he is familiar with: an ax. This sequence was a bit 1970s kung fu movie to me, and my tongue was planted firmly in my cheek.

While all this is going on, Lincoln works at a Springfield store and soon meets Mary Todd, who is being courted by Stephen A. Douglas. Am I the only one who didn’t even know they were dating? Lincoln’s aura of good will soon lures her into Lincoln’s arms, and the romance, as portrayed in the movie, is rather pat and a bit stiff. Mary Elizabeth Winstead, as Todd, is so pretty and ebullient, I wondered how she could ever wind up depressed, but hey, when you’re dealing with vampires…

The two are married, and at his own wedding, Lincoln learns that his African-American boyhood friend, Will Johnson (Anthony Mackie, whose versatility as a performer is beginning to be realized) has been abducted by the head of a vampire clan holding court in New Orleans. Adam (Rufus Sewell, an Englishman of Australian descent who was probably first seen by American audiences in L. A. Confidential, has also played Alexander Hamilton, if that gives you an idea of a character type he can render) has a hot vampire sister, and she’s played by Victoria’s Secret model Erin Wasso, who is limited to wearing clingy black dresses, and does a creditable job in this somewhat stereotypical kind of role.Hey, I watched a lot of Hammer horror movies in the 1970, so I’ve seen Ingrid Pitt and Barbara Steele do this kind of thing. They live in a rambling mansion in New Orleans (no, I didn’t see Tom Cruise or Brad Pitt).

Sewell adds a force and presence to the movie, and there is a great scene involving a very strange and harrowing ball, and the meeting of Lincoln and Adam. Adam gives him a challenge, and after hearing the challenge, Lincoln returns home, puts away his ax (approximating, in his narration, St. Paul’s urging to put away “childish things,” and we soon see him debating Douglas as a more vigorous man, charging towards the White House. Destroying slavery is his platform, but it’s really about destroying vampires. Trust me.

The movie culminates in a vivid action ns scene involving a train at night. And Lincoln as action hero? I was convinced. Not that there weren’t a few ridiculous moments along the way. At one point Lincoln uses an ax that has a gun at the other end. Pure Bekmambetov. When He figures out the key to winning at Gettysburg (there’s a nice ghostly scene set there), it’s like one of those moments where Dr. Greg House hears part of a conversation he hasn’t been listening to, the light bulb goes on over his head, and he leaves the room. There is an echo, too, of the old joke that begins, “So, outside of that, Mrs. Lincoln…,” which seemed a bit much.

Caleb Deschanel (yes, Emily and Zooey’s father!), one of my favorite cinematographers (he was director of photography for The Natural, probably the most beautiful-looking movie I’ve seen in color) makes wonderful use of texture, light and color here, even though there is a nifty sepia tone that desaturates the primary colors and makes us feel that we’re looking into the past at these historically accurate (as far as I know) sets and costumes.

So, if you go, you know what you’re in for: a gorgeous-looking movie that re-interprets (one way of putting it) history while holding on to facts and images we do know. Don’t go with my friend Mike. He points out the errors in movies with a historical setting. I’m sure he’ll have a field day.

BTW: I just read Ebert’s review. He gave it three out of four stars. Boom.