Movie Review: TO ROME WITH LOVE 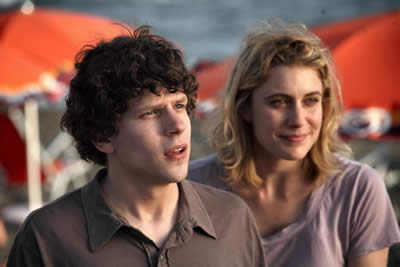 Jesse Eisenberg and Greta Gerwig in To Rome With Love. (PHOTO SUPPLIED)

Woody Allen’s Midnight in Paris was such a magical, enchanting movie, with the audience sharing the same sense of wonder that the protagonist does when he’s transported to the City of Light in the 1920s. Indeed, the magic must have spread through word of mouth, because the movie was financially his biggest hit. This, I suppose, gave him the impetus to take us to another beautiful city in To Rome With Love. Is this a trend? If so, I am looking forward to Winter in Warsaw.

Somewhere in the middle of my adolescence, I made it a point to see the Woody Allen Movies that came out, because they were funny, and because a couple of them were masterpieces, essential, like Annie Hall (still my favorite Allen movie, and one, as my friend John Waldscmidt would say, one that makes me “weep openly”) or Manhattan, or to me at least, the funniest of them all, Love and Death. The movies that preceded them, like Take the Money and Run, Bananas, and that glorious science fair project What’s Up Tiger Lily were all very funny. The movies that followed them, like Radio Days, Hannah and Her Sisters and that Woody Allen movie for people who don’t like Woody Allen, The Purple Rose of Cairo, showed Allen’s growing maturity as a writer, actor, and director, combining real emotion and psychologically believable characters with humor.

But then something happened. Allen passed out of his Golden Age, and began cranking them out, with the quality varying from movie to movie. (Spike Lee and Mel Brooks went through similar experiencers, I believe.) And yes, Midnight in Paris is among the best of the bunch. But To Rome With Love is a disappointment.

To Rome With Love does have the benefit of great on-location scenery of the Eternal City, just like Midnight in Paris did with its eponymous city, and the former film mimics the latter by opening with some breathtaking images of Rome, accompanied by Domenico Modugno’s “Volare;” this sequence is far shorter than the luxuriously long one in Midnight, and leads to a Roman traffic cop who tells us that he observes what goes on from his perch. Well, he‘s not exactly the Stage Manager, his monologue is more prosaic than witty, and he is quickly forgotten. We are then following a pretty young American girl, Hayley (Allison Pill) who meets cute with a handsome Italian man (Flavio Parenti), and quickly, through a montage, the two are ready for marriage, prompting Hayley’s parents to come to Italy.

They are played by Allen himself, and by Judy Davis, a favored actress of Allen’s. Davis does very well, considering that her dialogue lacks the glint and glimmer of earlier Allen movies; the same can be said for Allen, doing his usual neurotic, dyspeptic bit, a bit we haven’t seen in one of his movies for six years. The story seems like it’s going to be about conflict between the two families, but it takes a strange turn, more reminiscent of Allen’s earlier, farcical movies. This story is intertwined with three others throughout the film. One of those threads centers around a character named Leopoldo Pisanello, a low-level clerk played by that irresistible clown, Roberto Benigni.

My strongest memory of Benigni is his climbing over the theater seats to get to the main stage of the Kodak Theater to accept his Best Actor Oscar for Life is Beautiful. Such manic energy is largely absent here, as he plays a simple drudge who wakes up one morning, is dragged by strangers down to the TV studio, is asked hard-hitting questions about what he had for breakfast, and when he leaves the studio, is encountered by a mob of reporters and a growing army of fans who are relentless in their pursuit of him. This continues through the entire day until something (that a few members of the audience, I imagine, can forsee) happens to get him out of this situation, whether he wants to be relieved of it or not . Personally, I wish I could have seen more of Benigni the clown here. It’s true, he’s grown into a good character actor, but well, I missed the old him. If this segment is supposed to be commentary on our society’s addiction to celebrity, it’s a rather familiar parable.

Another thread is rather sweet. Two young newlyweds, MIlly (Alessandra Mastronardi) and Antonio (Alessandro Tiberi) check into a hotel. The young man is very nervous about introducing his new wife to his important, highly-placed family. Shortly before the family is about to arrive, Milly decides to get her hair done, and rushes off. While waiting for her return, Antonio finds his room invaded by a call girl who announces that she is here to fulfill his dreams. They figure out that she is in the wrong room, but that doesn’t prevent her from staying, and when Antonio’s stodgy and stuff family arrives, he finds it imperative to make them believe that Anna the prostitute is his wife. They leave for dinner, the masquerade intact.

God bless Penelope Cruz. As a high-end (and very popular) prostitute, this Spaniard playing an Italian spouts out Italian as believably and enticingly as if she were Sophia Loren. (They’re not called Romance languages for nuthin’, you know.) She’s packed into a short, vibrant red dress,and it’s amusing to see her taking a tour of the Vatican while wearing it. At one point she’s asked if she can imagine Michelangelo spending so much time on his back while painting the Sistine Chapel, and naturally, she can (there, I just spoiled a very old joke for you).

Milly, in the meantime, has dropped her cell phone down one of those pesky Strangers on a Train sewer gratings and is totally lost. (There is some great local humor here; everyone who gives Milly directions does so without using street names, and with no less than five turns past obscure landmarks.) She stumbles upon a movie shoot, and during the film company’s break, she gets to talk to one of her great movie idols, Luca Salta (Antonio Albanese), “the handsomest man in Italy.” The standard for being the handsomest man in Italy is apparently David Ogden Stiers. Both Milly and Antonio have their romantic entanglements before arriving at a happy conclusion. (Hey, you’ve seen at least one Italian sex comedy, yes?)

That storyline is amusing, but by far the funniest thread is about a successful American architect named John (Alec Baldwin),who, while having drinks with friends, tells his wife (Carol Alt- hey, I told you he was successful) he wants to see if he can find the street on which he used to live when he spent a year in Rome as a youth. He embarks, and on one street that looks familiar, he runs into a young American man, Jack (Jesse Eisenberg). Jack is currently living in Italy, and the two men come to the conclusion that this is indeed John’s old street. Jack invites John into his tiny apartment, where he meets Jack’s girlfriend Sally (Greta Gerwig), who is warm and inviting, and while seeing to the needs of Jack and John, mentions that her girlfriend Monica has suffered a breakup, and Sally has invited her to stay with them for a while; she also mentions repeatedly that Monica is a magnet for men, and that she is afraid of losing Jack to Monica. When she does arrive, Monica (Ellen Page) is an insecure, rudderless mess, but circumstances do force her and Jack together.

The young actors are all very good. Eisenberg is his usual, searching soul, and Page and Gerwig are both beguiling as, well, insecure, neurotic messes. But the funniest thing about this segment is, to no one’s surprise, Alec Baldwin. After he hands over the focus to this youthful triangle, he remains in the story as an advisor to Jack, not always seen by the other characters, similar to the Humphrey Bogart character in Allen’s own play, Play it Again, Sam. Baldwin has proven by now that he’s a master of comic timing and of the straight face, and I felt gratitude for every time he was onscreen.

One point I’d like to mention. I tend to hang on (dearly, at times) to the past, so I still remember when “foreigners” were often played by people not of that ethnic background. It might sound strange, then, when I tell you that it was refreshing to see Italians playing Italians. Well, except for Cruz, but I don’t hear anyone complaining.

While no Midnight in Paris, To Rome in Love is decent enough for passing the time. The settings are entrancing, the young people are beautiful (and good actors), the character actors are tried and true,and things move right along. And it’s good to see Woody Allen in a movie again. I should be as prolific and loving of life as he is at seventy-seven.

BTW: To Rome With Love is playing at only two theaters in the Chicagoland area; one in Streeterville and one in Lake View, and allegedly it is in wide release. I’ve used the term “cultural flyover zone” in regarding the South Suburbs, but I must tell you that I did see the very funny Bernie at the Holiday Star Theater (it’ll always be the Park Forest Theater to me), where they are also showing The Best Exotic Marigold Hotel, so all is not lost. As for Bernie, I finally get a movie named after me, and it’s about a murderous funeral director (don’t say mortician). Well, it’s not like it’s named after a subway vigilante or the head of a Ponzi scheme or anything.