On The Best Picture Nominees: Part I 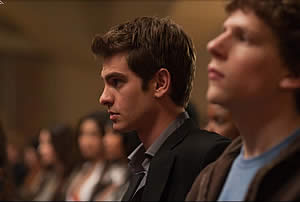 Since the Academy of Motion Picture Arts and Sciences has upped the number of Best Picture nominees to ten rather than five, I’ve been hard-pressed (though rapturously delighted at the opportunity) to see them all. Although I am a bit of a completist (and have maybe a slight competitive edge, and a self-satisfied delight in listening to myself talk about something I know about), I lover Oscar season because of the opportunity to see and hear the great form and content of the nominated films. This week we are going to take a general should-I-or-shouldn’t-I-see-it look at the five “frontrunners” in the race.

Remember, the Academy is awarding their own members for a job well-done, and handicapping the Oscars is something many groups and individuals do. (Personally, I pay the most attention to the prognostications of Entertainment Weekly magazine.) Pertaining to what my heart would liketo win in this group, there are three movies that really dug deep into my psyche (if any one of these three would win I would be happy), one, favored by EW, is stately, comfortable, and a rather calculated (if well-done and elegantly made) piece, and one just too bizarre and hard=t-classify to win. We’ll start with the movie I’d like to see win, and work through to the one that is, as they say, way out there.

I’ve already commented on THE SOCIAL NETWORK in this column. Of all the movies in this top five, this is the one that enlightened me, amused me, and sobered me the most. The saga of the formation of Facebook was filled with uncompromising performances, witty dialogue, moody cinematography, and a resultant feeling of ambivalence that marks the best “makes-you-think-about-it- movies. Jesse Eisenberg, as Mark Zuckenberg achieves the rare accomplishment of making someone who seems to be a real jerk extremely compelling. And any movie that makes me feel guilty about being part of a world-wide institution, I have to say it has an impact.

On approaching THE FIGHTER, I seriously wondered if anything further could be said about the boxing movie genre. I had seen MILLION DOLLAR BABY about a year previously, and thought that that movie effectively closed the book on the subject. THE FIGHTER, based on a real boxer’s life (as well as that of his family’s), was very naturalistic and visceral, and at its heart, was not a boxing movie, but, as Roger Ebert said about MILLION DOLLAR BABY, a movie about a boxer. Two, really. Mark Wahlberg plays Micky Ward, a young Bostonian who, after a lapse, wants to return to boxing and win the championship, and Christian Bale is his half-brother Dicky Eklund, a boxer who (questionably) knocked out Sugar Ray Leonard, and is now a crackhead managing Micky’s career. Wahlberg was not nominated for Best Actor, and even though he is subtle and utterly believable as Micky, the Academy does not generally go for subtle, and tends to nominate more showy performances. Bale is nominated as the hyperkinetic Dicky, and if anyone doubts that a person can be so high-strung, see the movie, stay through the credits, and watching the actually footage of the brothers.

It is with some embarrassment that I must admit that seeing Amy Adams in her underwear in the previews was a fairly significant lure for seeing the movie, but her performance as the earthy bartender who takes over management duties from Micky’s mother is a huge departure from her earlier work. (People talk about the actress seeming innocent, but as my Irish friends might say, she sure has the Devil in her. Hasn’t anyone seen MISS PETTIGREW LIVES FOR A DAY? Anyone? Anyone? Well, me neither.) She is up for Best Supporting Actress, as is Melissa Leo for her portrayal of the boys’ and their seven sisters’ (!) mother. Fiercely protective to the point of denying the pit that Dicky has dug himself into, the character is essayed by Melissa Leo, who I remember very fondly from the television show Homicide: Life on the Streets. Seeing her here, I even wondered if it were the same person, but seeing a picture of her sans makeup in EW reassured me that it was. That magazine favors her as the Best Supporting Actress winner.

TRUE GRIT, as directed by Joel and Ethan Coen, is not so much a remake of the 1969 John Wayne vehicle as it is a going back to the original well, Charles Portis’ 1968 novel. My sister and I saw the first TRUE GRIT when I was eleven and she was ten, and being good, duty-bound Catholics, we counted how many times people swore in the movie: we came up with nine for the entire movie. (Next year we saw PATTON and maintained the same diligence, but gave up after thirty.) Though I remember that movie fondly, but believe, like many others, that Wayne received the Best Actor Oscar for a lifetime body of work, it’s the recent version that again is the naturalistic and visceral experience that really connects to the gut as well as the mind and soul. Bridges is absolutely fine as Rooster Cogburn, the U. S. Marshal in the late nineteenth-century Old West hired by a young girl (Best Supporting Actress nominee Hailee Steinfeld)  to find the killer (a snarling, but largely pathetic Josh Brolin) of her father. Steinfeld is truly a revelation.

This movie does the best job of the five at recreating time and place: the lighting, sets, costumes, and even manner of speaking make us feel very assuredly that we are back in another time.  Seemingly simple-minded people speak in a very elevated manner (reminding us that these are the colonizers of the West, bringing what they’ve learned in the churches and universities of the East in the hopes of promoting civilization) that is reminiscent of another Coen Brothers movie, the differently-toned RAISING ARIZONA. The cinematography is fantastic, frequently giving us a feeling of the great isolation that people had to have encountered in this time and place. Among many examples of this is the scene where Rooster and young Mattie are alone in a vast, wintry forest, and then approached by……a bear riding a horse? (and to put any doubts to rest, Matt Damon IS a better Texas Ranger than Glen Campbell).

As I said earlier, I would be happy with any of the above movies winning Best Picture, with my hopes riding on SOCIAL NETWORK. With the next two, my feelings get murkier.

THE KING’S SPEECH is the perfect example of what the Academy would choose for Best Picture. It has evocative and realistic production design, brilliant and believable acting, and yes, it’s British. You know I’m not kidding about that last one. Colin Firth, as the British monarch who rallied his country during World War II (and had a debilitating stutter), is endearing, multi-layered and totally credible as George VI, ascending the throne when his brother, Edward VIII, abdicates to marry American divorcee Wallis Simpson. Geoffrey Rush, nominated for Best Supporting Actor, plays Lionel Logue, the Australian speech therapist that works with the king though his stutter, especially when he needs to show leadership at the onset of England’s involvement in it.

Make no mistake; it’s a great movie, but to me, at least (and I can already hear the disagreement I’m going to get from my friends) it’s a well-produced, well-directed, well-acted movie that is wonderfully unified……but doesn’t leave one tingling with exciting new knowledge, or great physical achievement, or as stunning an evocation of time and place as the three previous movies do. Believe me, it succeeds on all three of those levels, but not in the visceral way those three do. I guess that’s the need that I need fulfilled by a Best Picture nominee. EW favors KING’s SPEECH for Best Picture, as do a lot of folks, but I guess being comfort food isn’t enough for me. Colin Firth is up for Best Actor, and he’ll probably win, and he IS great in the part, but the cynic in me reminds me that Jeff Bridges took the prize from him last year (CRAZY HEART beat A SINGLE MAN in this category), so the tables will be turned in 2011. Wonderful movie, but not my choice.

The final movie of the frontrunners doesn’t seem as much of a movie as it does a stunt. Though one can’t in good conscience call BLACK SWAN boring, it’s hard to see exactly what it’s trying to be. When talking with people who have seen it (mostly high-school students), the reactions split down gender lines: the girls see it as a thrilling ballet story, and the boys see it, as I do, as a horror movie. The movie takes us into the world of professional ballet as it tells the story of Nina, (Best Actress nominee Natalie Portman) who wins the lead in an innovative, never-before-accomplished version of Swan Lake: she will play both the White and Black Swans. She trains under an aggressive, egotistical choreographer (seriously, is there any other kind…in the movies?), and the camera treats us to every drop of sweat, every pulled muscle, every crunched bone of every pirouette. Her mother is pushy, the new ballerina threatens her job, a prima ballerina is forcibly retired, and everything is happening as we might expect, but then the movie goes seriously off the rails.

BLACK SWAN at this point enters a surrealistic, is-it-or-is-it-not-real segment that is grandly operatic, and just plain nuts. The cinematography is wonderfully graphic (the whole movie is beautifully shot), and quite often what’s depicted makes one gasp. But frankly, there were times where the action was so grandiose, I started giggling, and by the end of the film I was wondering what kind of movie it was trying to be. It reminded me of Ken Russell moves from the 1970s that took the lives of famous artists (Liszt, Tchaikovsky, Mahler, Mary Shelley) and saw their stories through a wildly unfocused lens. A friend of mine also brought up a valid point: if the last line of the movie is what it is, shouldn’t the rest of the movie led up to it?

Natalie Portman throws herself into the role and is favored by EW (and just about everyone else) to win the Best Actress prize; she is certainly impressive, and there is character change, but the character keeps us at arm’s length. I’m not really one of those folks claiming that Mila Kunis (as the supposed rival) was robbed of a Supporting Actress nomination, but I will cite some of the other performances, and wonder if they should have been nominated: Vincent Cassel as the choreographer not above sexually misleading his star, Barbara Hershey as the emotionally teetering mother of Nina, and especially an unrecognizable Winona Ryder as the lead dancer forced into retirement.

As a Best Picture nominee, I don’t think BLACK SWAN has a chance.

Next time we’ll look at the darker horses in the race.