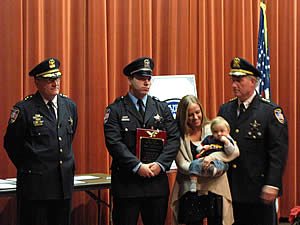 Park Forest, IL–(ENEWSPF)– The Park Forest Police Department honored its own and several citizens Sunday at the seventh annual Honors Ceremony at Freedom Hall. The event also served as the 60th Anniversary Celebration of the PFPD, the 25th Anniversary of the Officer of the Year award, and was the largest gathering so far as several former officers were invited back and recognized for their years of service to the citizens of Park Forest.

Detective John DeCeault was named the 2010 Officer of the Year, and Police Officer Charlie Hoskins received the highest award obtainable by any member of the Park Forest Police Department, the Police Medal of Valor. Several of Hoskins’ family members, including his parents, were in attendance. Family and friends of other officers were in attendance as well and accompanied the officers on stage as they received individual recognition.

The following received the Citizen Award: 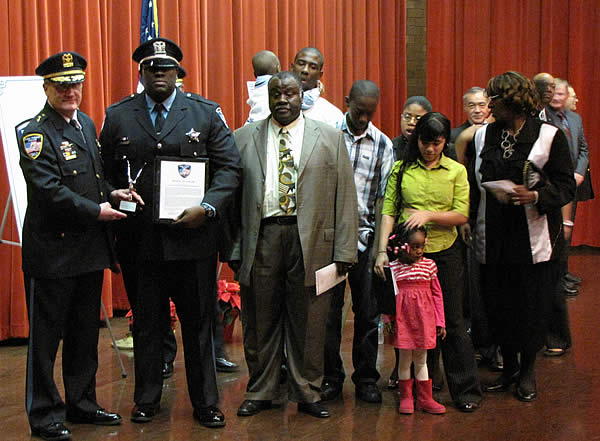 Officer Charlie Hoskins stands with his family as he receives the Medal of Valor from Deputy Chief Mike McNamara. (Photo: Gary Kopycinski)

For the 60th Anniversary of the department, police recognized many for decades of service. Not all of the retired 30 year and 25 year officers were in attendance. Several of them already passed away.

The following were honored for Thirty Years of Service:

The following were honored for Twenty-Five Years of Service:

Finally, the following received the Outstanding Service Award, (Because some officers were called to the stage several times, we include them in this list for every instance.):

The Term Award was given to Officers John Sweitzer, Kristopher Vallow, Justin Rimovsky and Lloyd Elliot for the first, second, third and fourth quarters respectively.

Finally, Meritorious Service Awards were presented to the following, "for services rendered in the line of duty where the officer, because of his/her initiative, diligence and perseverance, performs a difficult act in which crime is prevented, life saved, property protected or criminals apprehended:"