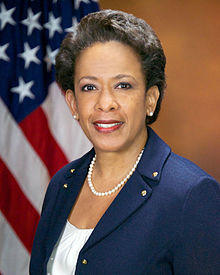 Good morning, and thank you all for being here. I am joined by Vanita Gupta, head of the Justice Department’s Civil Rights Division; Zach Fardon, U.S. Attorney for the Northern District of Illinois; Chicago Mayor Rahm Emanuel; and Chicago Police Superintendent Eddie Johnson.

One of my highest priorities as Attorney General has been to ensure that every American enjoys police protection that is lawful, responsive, and transparent. But as events in Ferguson, Baltimore, Cleveland and many other cities have made clear, far too many Americans feel that they do not receive that kind of law enforcement. And far too many communities suffer because of painful divisions between police officers and citizens – divisions that make it significantly harder to reduce crime, to expand opportunity, and to ensure that every American – including our police officers – can be safe and secure in their neighborhoods.

In December of 2015, as part of that work, I announced that the Department of Justice – after careful review and extensive consultation with state and local officials and community leaders – was opening an investigation into whether the Chicago Police Department (CPD) had engaged in a pattern or practice of violations of the Constitution or federal statutory law. For the past 13 months, our investigators have worked tirelessly to get a full, accurate and impartial picture of policing in Chicago. They conducted hundreds of interviews with citizens, officials, and officers; reviewed thousands of pages of documents; and observed CPD officers on the job. On the basis of this exhaustive review, the Department of Justice has concluded that there is reasonable cause to believe that the Chicago Police Department engages in a pattern or practice of use of excessive force in violation of the Fourth Amendment to the Constitution.

Our investigation found that this pattern or practice is in no small part the result of severely deficient training procedures and accountability systems. As my colleagues will explain in greater detail, CPD does not give its officers the training they need to do their jobs safely, effectively, and lawfully. It fails to properly collect and analyze data, including data on misconduct complaints and training deficiencies. And it does not adequately review use of force incidents to determine whether force was appropriate or lawful, or whether the use of force could have been avoided altogether. All of these issues are compounded by poor supervision and oversight, leading to low officer morale and an erosion in officer accountability.

These are serious problems, and they bear serious consequences for all Chicagoans. As I said when I announced this investigation, the systems and policies that fail ordinary citizens also fail the countless vast majority of CPD Officers who risk their lives every day to serve and protect the people of Chicago. During the course of our investigation, the department heard from countless officers who were disillusioned and discouraged by strained trust, inadequate training, poor oversight, and inattention to officer wellness and safety. Those officers are proud to wear the badge, but they recognize that they lack the support – both from the community and from the city – to properly do their jobs. They understand that repairing trust with the communities they serve will require difficult and meaningful reforms.

To Chicago’s credit, the city has not been standing still since we announced our investigation at the end of 2015. Under the leadership of Mayor Emanuel and Superintendent Johnson, CPD has taken a number of encouraging steps to improve oversight and encourage community-oriented policing. But our report makes clear that there is still considerable work to be done – work that will require federal partnership and independent oversight. That is why I am pleased to announce that the Department of Justice and the City of Chicago have agreed to begin negotiations on an independently monitored, court-enforceable consent decree. In the days ahead, we will continue speaking to local authorities, officers, and ordinary citizens to gather their perspectives about the challenges facing the city – and the changes needed to address them.

Of course, this announcement comes at a critical juncture for this proud city. Chicago is grappling with a deeply troubling rise in violent crime, one that has already claimed far too many lives. Fighting violent crime has long been a priority for the Justice Department. And we at the Justice Department have brought our full resources to bear on this issue – from the FBI, ATF, U.S. Marshals Service and the DEA, who have participated in joint task forces to combat violence; to the department’s Violence Reduction Network.

Our efforts to work closely with local authorities to fight violence in a number of ways began long before we announced this investigation, and they will continue after this investigation. No one understands that better than Zach Fardon. Under his outstanding leadership, the U.S. Attorney’s Office for the Northern District of Illinois has worked around the clock to tackle gun violence, gang cases, and other serious crimes afflicting the city. At the same time that Zach’s office actively partnered with our Civil Rights Division on this pattern and practice investigation, the prosecutors in his office in 2016 charged the highest number of illegal firearms cases in any year since 2004. So the U.S. Attorney’s Office here and federal investigative agencies have truly ramped up their efforts to help stem the recent rise in violence.

But, as I have seen firsthand from my Community Policing Tour, that work is undermined if the community does not trust law enforcement. That is why, in addition to increasing intelligence efforts and enhancing crime-fighting operations, we are also working with the city on a range of other critical initiatives, from youth outreach to counseling victims of crime. These efforts will continue – and they will only be strengthened by the reforms we are announcing today. Because successfully reducing and preventing violent crime requires a collaborative and trusting relationship between officers and residents. Where that relationship is broken – as it is in far too many of Chicago’s neighborhoods – it is much harder to solve crimes and reduce violence. By making the changes necessary to bring constitutional, community-oriented policing to Chicago, the city and the police department will put itself in a much stronger position to combat the scourge of violence.

Finally, I want to commend the people of Chicago for their patience and resilience throughout this long process. Community-police relations is an especially difficult issue. It taps into long histories, deep beliefs, and strong opinions. It forces us to honestly acknowledge the ways in which our society has fallen short in extending the protection of our laws to all Americans. It does not yield to swift or simple solutions.

But meaningful change is never easy. The task of realizing the promise of our country has always been hard. And here in Chicago, thanks to the determination and commitment of countless public officials, police officers, advocates, and citizens, we have taken the first step towards a brighter future. The people of this city have recognized that there is work to be done. And they have committed themselves to seeing that work through to the end. The Department of Justice will stand beside you along the way – and I am confident that when we are finished, Chicago will be a stronger, a safer, and a more united city for all who call it home.

At this time, I will turn things over to Vanita Gupta, head of the Civil Rights Division, who will say more about our findings.