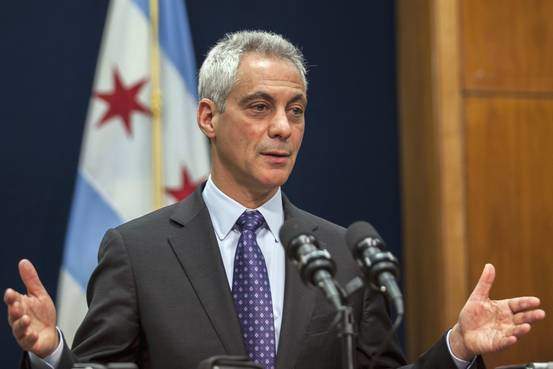 CHICAGO–(ENEWSPF)–January 13, 2017.   Mayor Rahm Emanuel and the Police Department Superintendent Eddie Johnson today announced that following the US Department of Justice’s (DOJ) 13-month pattern and practice investigation, the City has signed an “Agreement in Principle” to negotiate a consent decree with DOJ.

Below are the prepared remarks of Mayor Emanuel and Police Superintendent Eddie Johnson for today’s press conference.

“Good morning. Thank you all for coming. I want to say a few words about the report that was released this morning, and then following Superintendent Johnson’s remarks we will be here for questions.

While the Chicago Police Department has made real progress and achieved meaningful reforms, the incidents described in this report are sobering to all of us.

Police misconduct will not be tolerated anywhere in this city and those who break the rules will be held accountable for their actions.

Misconduct not only harms the individuals affected, it damages the reputation of the Chicago Police Department.

At the same time – it is important to recognize that the incidents of misconduct cited in this report do not represent the values of the City of Chicago – and I believe firmly they do not represent the good work of the vast majority of the men and women of the Chicago Police Department – as the report itself cites.

That is why I am confident that any wrongdoing cited in this report can be solved by what most Chicago police officers are doing right . . . and doing right every day in very trying circumstances.

One of the many privileges I have of being Mayor is getting the chance to spend time with our police officers.

I am consistently impressed by their dedication, their sense of duty, and their desire to serve the people of this great city.

That goes for new recruits and that also goes for our senior officers.

I am reminded of the words of a recent graduate of the Chicago Police Academy, who as President spoke for his class at his graduation ceremony.

He said he chose to join the force because ‘this is the only Chicago we have, and we can only move forward together as a united team with mutual respect.’

That is a sentiment we need to keep front and center as we make essential changes to strengthen Chicago’s police department.

We need to keep that spirit and that resolve alive in every one of our officers – and not just spoken on graduation day.

Which means we need to support our officers and give them the resources to do their jobs. We need to provide clear policies, consistent leadership, and certainty around training.

As this report makes clear – focused and consistent supervision and management are essential.

That is why Superintendent Eddie Johnson and his command team are providing a new approach to leadership, and we are hiring and promoting hundreds of new detectives, sergeants, lieutenants and field training officers to provide management and guidance for the entire department.

Today you will hear from Superintendent Johnson about some of the steps they will take to build on the reforms of the last year and the changes we will be adopting in the days, weeks, and months ahead.

I want to be clear, the Chicago Police Department and the City of Chicago is already on the road to reform, and there are no U-Turns on that road.

As noted in this report: we have already improved and expanded de-escalation training and we are upgrading our use-of-force policies.

We are providing every officer with body cameras and Tasers.

We have expanded recruitment efforts to ensure the department draws on all communities and all the strengths of the city. As a result of our efforts, today the Chicago Police Department has the most diverse command staff in its history.

We have improved transparency and strengthened our oversight and accountability.

We have changed the way our first responders react to individuals with serious mental illness, so they know the difference between a mental health response and a criminal response – and we have given them the training they need to know that difference.

But we are not going to rest on our laurels because our work is not done.

We all want to help officers achieve and maintain the highest level of professional standards – and we also have to give them the certainty and support they need so they are proactive and engaged in their communities.

We all want our communities to be safe and secure.

We all want our dedicated officers to have the tools, the training, and the technology – not only to do their jobs but also to earn the trust they need to be successful.

We all want our children to have mentors, positive role models, enriching after school activities, and rewarding summer jobs.

We all want economic opportunities and good jobs in every part of this city.

And we all want repeat gun offenders to be prosecuted to the fullest extent of the law for the crimes they commit, whether it’s locally or nationally.

Getting there will not be easy. It’s difficult, but doable.

As I said in my speech at Malcolm X College last fall, we all know from our own lives that change is hard.

It is especially hard when we are simultaneously asking officers to fight crime while adopting and integrating fundamental changes to the way they approach their jobs.

Our officers know they need to earn the trust of the residents they serve and the communities they police. They don’t get a blank check. They have to earn it.

But when they do, they need to hear from all of us that they are appreciated and their work is important. Because let me be clear: there is no resource and no technology we purchase that will match the resource of community support and community engagement when it comes to public safety.

So when it comes to reducing gun violence and crime, there is no us versus them. We are one Chicago with one goal.

It is my fervent hope that our work together will help our officers maintain the highest professional standards while they fight against gun violence.

I want to thank the Attorney General and the Justice Department for their tireless work.

I appreciate this report’s candor: about both the abuses of the past and the reforms we have made to date.

As we move forward there are questions about what the next administration in Washington will do, but we know with certainty what we will do in the City of Chicago. We will continue on the path of reform because that is the path to progress.

And our success will be determined by our courage as a city to use the lessons learned from some of the shortcomings of our past to build a future we can all share and be proud of.

As I said earlier . . . any wrongdoing cited in this report can be solved by what most Chicago police officers are doing right . . . and doing right every day.

I’d like to end where I started. What impresses me most about the officers I meet – like those I sat with on Sunday in the 3rd and 6th Districts on the South Side – is their steadfast determination to make Chicago not only a safer city, but a better one.

That is a lesson for all of us.

The report released today by the U.S. Department of Justice contains a critical look at a number of serious challenges that the Chicago Police Department faces, many of which we have identified and have been working to remedy over the past year – something noted by the DOJ in their report.

As Superintendent, and for anyone who wears the CPD star, some of the findings in the report are difficult to read, and highlights the work we have yet to complete to restore trust between the Department and the communities it serves.

Unconstitutional policing has no place in the CPD or the city of Chicago. That’s why we’ve been fully cooperative with the DOJ throughout their investigation and many of their findings have come as a result of their interviews with Department personnel.

What the findings in their report say to me is that we need to do a much better job at mentoring, supporting, and training our police officers – it’s what they deserve for putting their lives on the line for us and what the city deserves when we ask for its trust.

Quite simply, as a department, we need to do better. And you have my promise and commitment that we will do better.
CPD has already taken significant steps to address some of the issues raised in the DOJ report.

And we will work hard every day to continue this critical reform effort by providing police officers better training and resources, and continuing to build trust and accountability with the public.

In 2016, we launched live, scenario-based training for force mitigation and de-escalation. We partnered police recruits with teenagers from areas affected by violence so both officers and kids gain a better understanding of one another. We overhauled our officer merit promotion process to make sure that the best and brightest are becoming the next generation of leaders at CPD. We continued to train officers in Crisis Intervention, with nearly 3,000 officers achieving certification so far. And for the first time in the history of our Department, we held a public comment period on our draft revision to our use of force policy.

Despite this progress, it is important to recognize that the challenges we face will not be fixed overnight. It will take a sustained effort over time to achieve the systemic reforms that are necessary.

That’s why we’re hiring more officers and promoting more detectives, sergeants, and lieutenants over the next two years to provide additional supervision and critical resources in the neighborhoods that need them most. We’re reinvigorating our entire training operation which will include modernized curriculum and the creation of a state-of-the-art training facility. We’re going to continue to enhance transparency by equipping every police officer on regular beat patrol with a body worn camera by the end of this year. We will forge meaningful partnerships with the public by launching a new community policing pilot before spring. We will roll out our new use of force policy based on officer and public input, with training beginning this year as well.

And we will make officer accountability more transparent, certain, and consistent by publishing a matrix of disciplinary offences and associated penalties.

So I’m optimistic and hopeful about the direction we’re headed and I am realistic about that fact that there is much work ahead of us.

While this report certainly highlights what we need to address and where we need to improve, we must also never forget the 12,000 men and women who swore an oath to protect the Constitution, the City of Chicago and every Chicagoan. They’re the same people who answered a call to service and leave their families every day, uncertain if they’ll make it back home and we must be respectful and appreciative of their commitment and dedication to service.

The report doesn’t negate the amazing service of these men and women. I’m proud of the work they do and I’m humbled to lead this Department.

Their jobs aren’t easy and it’s up to us to make sure they have what they need to do their jobs effectively and safely – for themselves and for the public. We started on that path a year ago and I give my word to every officer and every Chicagoan that we won’t quit until we get it right.