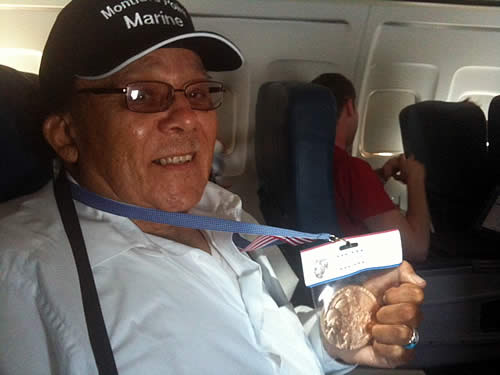 Washington, D.C.-(ENEWSPF)- The first African American Marines, also known as the Montford Point Marines, have been awarded the Congressional Gold Medal in a ceremony in Emancipation Hall of the Capitol Visitor Center on, June 27.  They were also be the guests of honor at a parade hosted by the Commandant of the Marine Corps at Marine Barracks Washington on Thursday, June 28.

Park Forest’s own Ed Fizer is among the recipients.

From 1942 to 1949, approximately 20,000 African American recruits were trained at Montford Point during World War II. Of those brave men, over 13,000 served overseas during the war. There will be almost 400 Montford Point Marines in attendance, and they will each receive a bronze replica medal the next day at the parade at Marine Barracks Washington, DC.

The Congressional Gold Medal is the highest civilian honor awarded as the utmost expression of national appreciation for distinguished achievements and contributions.

The Congressional Gold Medal was designed and approved by the Montford Point Marine Association, Inc., the Marine Corps and the U.S. Mint. Bronze replica medals will be available for purchase on the U.S. Mint webpage June 28, 2012.