“The American people want healthcare that’s affordable and accessible. Premiums and deductibles continue going up, and the Graham-Cassidy plan would make these increases much worse,” said Congresswoman Kelly. “The American people deserve to know that this plan will massively raise premiums on every day Americans living with pre-existing conditions, such as diabetes, asthma, autism or being a cancer survivor.”

To raise awareness on the issues associated with the Graham-Cassidy bill, Congresswoman Kelly sent this series of tweets: 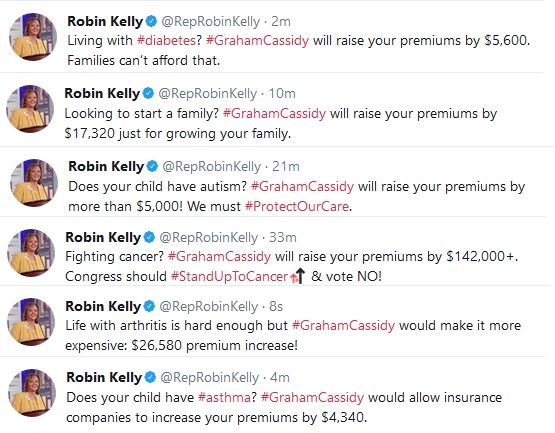 “The Graham-Cassidy plan is just cruel. We should be celebrating Americans who beat cancer, not allowing insurance companies to charge them astronomical premiums,” added Congresswoman Kelly. “I’m proud to stand with the American Medical Association (AMA) and American Association of Retired Persons (AARP) in opposing this disastrous bill that will raise costs on hardworking American families and take healthcare away from millions of Americans.”

‘Red Alert’ Sounded: Trumpcare Is Back, More Brutal and Deadly Than Ever

Premiums for Employer-Sponsored Family Health Coverage Rise Slowly for Sixth Straight Year, Up 3% but Averaging $18,764 in 2017