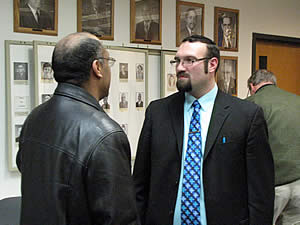 Jonathan Vanderbilt (right) "will bring a unique perspective and fresh ideas to the Board." (ENEWSPF)

Park Forest, IL—(ENEWSPF)—March 25, 2013. On April 9th, Park Forest residents will have the opportunity to elect three Trustees to the Village Board. Park Forest, like many communities, is facing the problems of a shrinking tax base, higher crime rates, and the need to replace its 50+ year old water main infrastructure. These problems are even more complicated today due to the impact of the federal sequester and delayed tax revenue from the State of Illinois has had on local communities. These are difficult problems to address in very difficult times. It is a critical time for Park Forest to have the best possible leadership to address these very complicated issues.

Ten candidates are running for the three Trustee positions. All have a commitment to make Park Forest a better place for all. Most have been active in Village Commissions, Advisory Groups, community projects, and youth activities. As a result, making these endorsements was not an easy decision.

We believe that three of the candidates are best suited to work with the Mayor and current Trustees to develop realistic solutions to address the problems of Park Forest. Our rationale for these endorsements follows.

Robert McCray is seeking a third term as Trustee. He is intimately aware of the problems facing Park Forest and the needs of its residents. He has worked with the current Trustees to grow the DownTown area, develop plans for the redevelopment of the vacant land near the 211th Street Metra Station and the former Norwood Plaza. He has been actively involved in the development of the Village’s Sustainability Plan. We believe at this time, it is important to have someone on the Board who is intimately aware of the Village’s issues and for this reason, endorse the re-election of Robert McCray.

As a third generation Park Forest resident, Jonathan has experienced what it is like to live in Park Forest as a child, young adult, and now a married man. He has lived in the single family homes, rental units and now resides in the Area B Cooperative. This life-experience alone makes him uniquely qualified to serve as Trustee as he is intimately aware of the issues facing all in Park Forest regardless of age or what type of housing we live in. Jonathan currently serves on the Recreation and Parks Commission and Mayor’s Citizen’s Advisory Commission. He has been very active in the Park Forest Community Garden project starting a garden in 2012 on Algonquin Street where he recruited neighborhood volunteers who worked in the garden and shared in the harvest. We believe that Jonathan will bring a unique perspective and fresh ideas to the Board and for this reason, endorse his election for Trustee.

Theresa Settles is a thirty-three year resident of Park Forest who along with her husband, James, has raised her two daughters here. Besides being a registered nurse, she has an extensive background in banking, advertising and small business administration. She has served on many of Park Forest’s Commissions and Advisory Boards over the years. As a working mother, Theresa is keenly aware of the issues and challenges faced by the working moms of Park Forest. As a nurse, Theresa is also aware of the issues facing our aging and disabled population. We believe that both her professional and life experience make her well qualified to serve as Village Trustee.

Where and When To Vote

For a list of additional early voting locations and additional election information, visit: cookcountyclerk.com/elections/earlyvoting for Cook County or this link for Will County. More Will County information is available here.

Whether you vote early or on April 9th, please remember to exercise your right to vote in this very important Park Forest election.