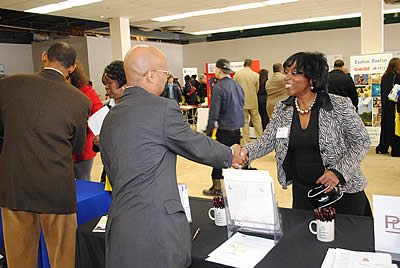 On Tuesday, March 6, 2012-the National Congress of Black Women, Metro Chicago Chapter (NCBW-MCC) and the Village of Park Forest hosted its first annual job fair held at 300 Victory Drive. It was indeed a memorable occasion. Beyond the 40 companies that met with approximately 400 candidates, the atmosphere was filled with anticipation and optimism. Dozens of job seekers received invitations for interviews and/or job offers, and the results are still trickling in.

Participants commended the organizers for a well-planned event and expressed appreciation for the diverse group of participating employers. In addition, the employers were impressed with the qualification and preparedness of the candidates.

The job fair was open to the public. Judging from the very positive feedback received after the event, including inquiries about when the next job fair will be held and requests for more such events in the future, it is clear that the job fair was a smashing success.

About The National Congress of Black Women

The National Congress of Black Women, founded in 1984 is a non-profit organization dedicated to the educational, political, economic and cultural development of African-American Women and their families.

The Metro Chicago Chapter (NCBW-MCC) was established in 2009.