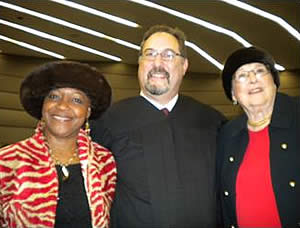 Cook County, IL-(ENEWSPF)- On Monday, December 6, approximately thirty family members, friends and supporters watched as Linzey Jones of Olympia Fields was sworn in as Circuit Judge of the Circuit Cook of Cook. Judge Jones fills the vacancy of the Honorable Marcella C. Lipinski in the 15th Subcircuit Court. Jones won the primary in February and was unopposed in the November 2nd election. Prior to being sworn in he served as President of the Village of Olympia Fields for 12 years.

Chief Judge the Honorable Timothy Evans administered the oath of office to Jones and twenty other newly-elected circuit judges in a ceremony where speakers offered encouragement, advice, and congratulatory messages. Among those who addressed the new judges were Clerk of the Clerk of the Circuit Court Dorothy Brown, State Attorney Lisa Madigan, Cook County State’s Attorney Anita Alvarez, and Judge Cunningham from the Public Defender Division.

Judge Jones received his Juris Doctorate from the University of Illinois College of Law and established a  professional career of nearly thirty years. He served as an attorney for the international firm of Sidley Austin LLP and Pugh, Jones, Johnson & Quandt P.C. As an attorney, Jones represented companies, municipalities, individuals and not-for-profits, in a variety of legal matters in the Circuit Court of Cook County, as well as federal courts throughout the United States. In 2009, he and his wife of 29 years, Gloria, received the Pillar Award for Community Service from St. James Hospital.

As Judge of the Circuit Court, Jones stepped down as President of the Village of Olympia Fields. On Wednesday evening, the Village Board of Trustees voted Debbie Meyers-Martin as Village President to complete the remainder of his term.

She was sworn in by The Honorable Judge Linzey Jones.