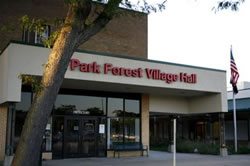 The next meeting of the Village Board is scheduled for Monday, December 7 at 8 p.m. at Village Hall. Residents are encouraged to attend.

To view previously held Board Meetings, visit the Village’s web site at: http://www.villageofparkforest.com and click on the date of the meeting you wish to watch.

Consistent with its settlement package with CN, the Village of Park Forest has begun deliberations with CN on establishing the framework for a Noise Mitigation/Home Improvement Program. Guidelines of the program will be discussed with the Village Board of Trustees in the coming weeks and months with implementation projected for sometime in early to mid 2010. Residents with questions regarding this issue can contact the Village Manager’s Officer at 708-748-1129.

Related to noise abatement associated with rail road operations through Park Forest, a long-time resident concern has been the loud crashing noises emanating from the rail yard. CN has explained to the Village that this noise is normal with train operations. When rail cars are coupled together, they must be forced to make physical contact with each other, whereupon the couplers engage and secure the cars together. This coupling and the associated clanging is repeated, as needed, to add more cars and build longer trains. But there is good news on the horizon. CN has informed the Village that the rail yard in Park Forest will ultimately be decommissioned and removed from service as part of the switch rail construction work currently underway. The exact timeframe for the transition is yet to be determined.

In the past week, the Village has received confirmation that it has been awarded two substantial grants. One is a $500,000 federal earmark for sanitary sewer rehabilitation work. This grant is funded by the U.S. Environmental Protection Agency and was supported by the efforts of Congressman Jesse Jackson, Jr. The second grant notice came in the form of a $300,000 Community Development Block Grant (CDBG) from Cook County. These funds will be connected with two other CDBG grants from Cook County totaling in excess of $900,000 toward the long-necessary demolition of the former Marshall Field’s department store.

These additional grants add to several other major grant awards that have been forwarded to Park Forest in the past several months. Other grants include a $495,000 grant for the resurfacing of Orchard Drive from Sauk Trail north to Lakewood Boulevard, and a $500,000 grant for Neighborhood Stabilization Program efforts. Finally, the Village continues to pursue 80% grant funding for the overhaul of Orchard Drive from Route 30/Lincoln Highway south to Lakewood Boulevard. The funding project is being pursued as part of the federal government’s 5-year Transportation Bill.

In Civil Court action on property maintenance code enforcement matters, one case was heard and a demolition order was entered against the property. On November 29, five property maintenance code enforcement cases were heard through the Adjudication Hearing Court process. The results were, one case received a $750 fine, one case was dismissed due to compliance, and three cases continued until the next hearing date. The 314 Nakomis and 80-90 North Street cases were up for status hearings.

The next New Resident Reception will be at the Illinois Theatre Center on Saturday, January 9 from 6 p.m. to 9 p.m. The reception will include a comedy show which will include BET Jay Deep along-side other local comedians. The children will be able to attend a class of crafting provided by Etel Billig. The reception is open to all Park Forest civic organizations who would like to exhibit. Call Evelyn Sterling at 708-283-5621 or e-mail [email protected] to reserve a table.

The Park Forest Fire Department responded to 50 calls for emergency assistance this past week including, one triple call and 6 double calls. Mutual aid assistance was provided once each to the University Park, Richton Park and Chicago Heights fire departments.

The holiday season is now upon us and the fire department would like to remind residents to “Keep the Wreath Red.” The department has been participating in the “Keep the Wreath Red” program since the early 1980’s when the Illinois Fire Chiefs’ Association began the program. This program was created to remind people of the importance of fire safety – especially during the holidays. The wreath is illuminated 24-hours a day with red bulbs. Whenever the department responds to any home fire, all the bulbs will change to white and remain white for 24 hours. They will then change back to red, except for one white bulb which will remain to represent the fire. Please keep fire safety in mind this holiday season and help “Keep the Wreath Red.”

Sunset Sewer and Water completed the drainage job at 50 Monee Road. They are working on the 54” culvert on Forest Boulevard.

A B-box was replaced at 222 Arcadia. A fire hydrant was replaced at 417 Winnebago. The finishing touches were done on the Christmas lights in DownTown. Potholes and deteriorating pavement were patched. Sanitary sewers were cleaned and street lights relamped or repaired. Grates are being fabricated to keep out big chunks of salt on the dump truck.

On November 24, 29 students from Rich Central High School’s Applied Science class toured the Water Plant. They were interested in how the treatment process ties into the community and potential careers in the water industry. After touring the facility, they moved on to tour the Thorn Creek Basin Sanitary District Plant.

About 15 summer staff members and several Board members were on hand at the bathhouse on the Friday afternoon after Thanksgiving for a “sneak peek” at construction progress in the building. Most were quire surprised at the extent of the changes and pool staff was already thinking of the upcoming summer.

Those on Facebook (www.Facebook.com) can search for the “Park Forest Aqua Center” page in the upper right corner and follow a photographic record of the project.