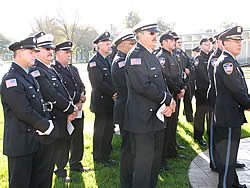 The Village Board is scheduled to meet on Monday, October 12 at 8 p.m. at Village Hall. Residents are encouraged to attend.

The Village Board attended a strategic planning lecture this past Tuesday evening at Freedom Hall. In addition, approximately 70 representatives from all school districts, Village Commissions and other taxing bodies serving Park Forest tax payers were in attendance. The session was presided over by Dr. Paul Craig who has facilitated the Village’ strategic planning process over the past 3 years. Dr. Craig’s lecture focused on the importance of planning and leadership at all levels of government, especially in these current times of economic uncertainty. The lecture was videotaped and will be rebroadcast on local cable access channels in the coming days.

Village Management Staff held a strategic planning session this past week with facilitator Paul Craig as part of the 2010-2011 Budget preparation process. Summary notes from the session will be forwarded to the Mayor and Village Board of Trustees for consideration as they establish goals for the next fiscal year.

Village Manager Tom Mick attended a meeting this week of the Management and Finance Committee for the South Suburban Mayors and Managers Association (SSMMA). Topics discussed included the Chicago Southland Economic Development Corporation, a permanent site for a PADS shelter and the South Suburban Housing Collaborative’s joint application to the State of Illinois seeking funds for the Federal Neighborhood Stabilization Program.

The new Lincoln Highway interpretive gazebo is now in place at the northeast corner of the 211th Street Metra Station parking lot. The gazebo is part of a federal grant project sponsored by the Illinois Lincoln Highway Coalition. The gazebo will be completed in the next few weeks when interpretive panels are installed inside the gazebo which describe the history of the Lincoln Highway in Illinois. Many thanks to the Village’s Departments of Public Works, Recreation and Parks, and Public Information for their assistance with this project.

Deputy Chief Mike McNamara is now an Inspector with the Illinois Boxing Commission. Inspectors make sure all rules are followed, watching when fighters have their hands taped and the cornermen follow proper procedures and rules during the fight. Deputy Chief McNamara has been an Inspector for four boxing matches and one Mixed Martial Arts fight card held at the UIC Pavilion in Chicago.

Ken Eyer attended the first meeting of the newly formed Suburban Public Works Directors Association on Thursday, October 1. The purpose of this organization is to provide a uniform voice to handle everyday issues that affect the south suburban communities.

A preconstruction meeting was held last week with K-Five Construction for the Legacy Square/School House Manor asphalt surfacing project. The Contractor is expected to begin work this week.

This week, storm sewer structures were rebuilt at 227 Grant and 323 Minocqua. A watermain break was repaired at 463 Tahoe. Street lights were relamped and sanitary sewers were cleaned. Storm sewers were cleaned last Monday, October 5 in response to a rain event.

The contractor has completed the punch list items at Well #6 and Well #7. Satisfactory lab results have been received for Well #6 and it is back in service. Well #7 has been capped and abandoned per Illinois Department of Public Health Regulations.

On Saturday, October 3, members of the Board of Trustees and staff visited the Aqua Center to give some of the first demolition blows to the old concession stand building. The building served as the original bathhouse and was constructed in 1954. It originally had outdoor open air showers and a ‘basket room’ in the areas that has most recently been the concession stand. During the process a time capsule was exposed that was mortared into one of the concrete blocks in 1972. This is believed to have been done when the original builders of the center, Park Forest Aqua Center, Inc., sold the facility to the YMCA Metropolitan Chicago. The Village purchased the facility from the YMCA in 1983. The contents of the time capsule included a staff list from 1972, season pass application, numbered pins given to those who checked street clothes at the ‘basket room’ and of course the legendary ‘Badge’ that young people had to earn by passing a swim test before they could enter the “Badge” (now West) pool.

Staff met last week with the architects to begin choosing colors for the walls, floors, etc. in the bathhouse. Individual contractors are working on their licensing in the Village and getting shop-drawings to the architect and construction manager.