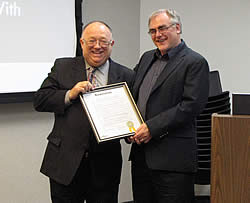 At the September 29 meeting of the Village Board, Barbara Osuch, Director, Park Forest Library, and Penny Shnay, President of the Library Board provided a detailed overview of the library renovation project. A full-scale remodeling of the whole first floor will be done over the next six months. It is anticipated that the library will remain open during the renovations. The library has sufficient funds to cover the projected costs of the renovation project. As a result, taxpayers will not be asked to finance the project. Click on the link below to view the presentation (Note: the library presentation begins approximately 14 minutes into the Board meeting).

You can also view artist’s renderings of the renovations at: http://www.pfpl.org/about_library/news.html. 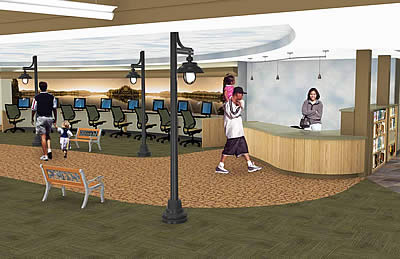 The Village Board scheduled for Monday, October 5 has been cancelled.

Hildy Kingma attended the annual conference of the Upper Midwest American Planning Association. While much of the conference was focused on a celebration of the 100 year anniversary of Daniel Burnham’s 1906 Plan of Chicago, Hildy attended other informative sessions on Planning Law, Sustainable Development, and Downtown Redevelopment.

Detective Todd Beilke conducted the most recent Crime Free Housing seminar at Dining on the Green with 23 Park Forest landlords in attendance.

Chief Fleming just ended his one-year term as the South Suburban Chiefs of Police President. He will continue to serve on the advisory board.

The contractor for the Orchard Drive watermain replacement project has completed the work on the watermain and has started concrete and asphalt restoration. Orchard Drive will continue to be open to one-way traffic northbound. Southbound traffic is being redirected during the restoration.

Ken Eyer and Brett Millsap and CN Railroad representatives met to review specifications with contractors for the resurfacing of the portion of Metra Lot #2 which will be going back to Park Forest.

Ken Eyer recently attended a Technical Advisory Group (TAG) meeting. The purpose of this meeting was to review the status of American Recovery and Reinvestment Act (ARRA) projects in the South Suburban Council and to review Village requests as well as give recommendations to the transportation committee.

Sunset Sewer and Water of Monee inspected the interior of the 54” corrugated pipe along Forest Boulevard near Court J-18 in the drainage way to locate the problem and give a recommendation for repair.

Trucks are being brought in this week for twice annual safety certification mandated by the state.

Environmental Consultant Emily Kenny from ME4E had Indiana School children at the Central Park wetlands recently taking water samples in the stream area. In addition, over 20 students from Communications, and Biology I & II classes at Prairie State College learned about the project from John Joyce and Rob Gunther and followed up with learning water sampling process from Ms. Kenny. They were also walked through the proposed Environmental Classroom space to learn about what is coming.

Members of Thorn Creek Audubon Society conducted a bird census at several south suburban sites. They reported that Central Park was by far the best bird habitat on that particular search with over 25 different species identified in just one short visit.

The Village’s tree pruning contractor began work this week. Trimming is being done at Cedar Park, parts of Central Park and on Walnut Street.

Rob Gunther drafted a letter that has been delivered to several residents to explain the Emerald Ash Borer problem. While the borer has not been positively identified in Park Forest to date, it is likely here. The current management practice is to remove all ash trees that appear in a weakened state.

The 2nd Annual “Girls Shoot for Success” basketball clinic was held recently at the Recreation Center. Participants, ages 9 to 14 were treated to sessions by Recreation Supervisor Kevin Adams, Coach Eric Armstrong and Team Xpress AAU out of Harvey, Coach Jonnie Bass and the Rich East Lady Rockets and Coach Jeff Boyd and the Prairie State College Lady Pioneers. The event is designed to show the importance of promoting a healthy lifestyle through athletics, positive life choices, nutrition and where young people can go (high school, college and beyond), given positive life choices around athletics. A healthy lunch followed the activity as an added bonus. Many parents were in the stands admiring the program during the session. Congratulations to Kevin Adams for setting up and supervising this successful event.

Anna Soloff has finalized most of the details for the first Park Forest Chess Challenge Tournament to be held on Saturday, October 17 from 9 a.m. to 4:30 p.m. at Dining on the Green. The registration fee is $5 per person and all ages are invited. The challenge is organized by the Park Forest Chess Program, an affiliate of the U.S. Chess Foundation.

Carolyn Hoff and Chuck Sabey worked on a beautiful Freedom Hall email newsletter that was sent to over 100 email addresses via Constant Contact on September 25. The inaugural issue announced completion of the new seats in the Theater and promoted the upcoming Second City performance.

Members of the Parks Staff delivered soil to backfill around the new emergency ramp that was constructed outside the east emergency exit door to the Theater. Material was ordered to construct the required hand rails for the new concrete ramp. The concrete ramp replaces one of asphalt, dating from the building’s construction in 1976 which did not technically meet ADA regulations.