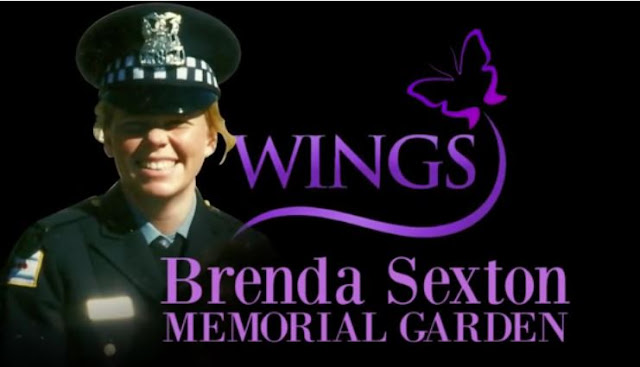 CHICAGO–(ENEWSPF)–October 29, 2015.  Mayor Rahm Emanuel today joined the family of Brenda Sexton and WINGS Metro leadership to dedicate the Brenda Sexton Garden on the site of the City’s newest domestic violence shelter in over a decade. The garden honors the memory of Brenda Sexton, a Chicago Police Officer who served the 8th Police District, and was tragically murdered at the hands of an abusive boyfriend. The Mayor’s visit to dedicate the garden is also in observation of national Domestic Violence Awareness Month.

“Domestic violence victims should never have to hide in the shadows or suffer in silence,” said Mayor Emanuel. “The dedication of this new garden will honor the life of one too many lost to domestic violence and will represent the first step for many women as they move forward in healing. Today is also a reminder that we have work to do in eliminating domestic violence altogether, so that our families and our communities can thrive.”

The Brenda Sexton Garden is on the grounds of the city’s newest domestic violence shelter located in the heart of the Chicago Lawn Community. In addition to providing family suites, the new two-story, 40 bed WINGS Metro facility will feature a street-level retail or resale shop as well as a limited number of permanent housing units. It is anticipated that more than 100 families will be served by the facility during its first year of operation, and it will effectively increase the number of available beds for domestic violence victims and their families citywide by 36 percent.

The new shelter has been constructed under a partnership that includes Women in Need Growing Stronger (WINGS), Metropolitan Family Services, and the Greater Southwest Development Corporation. Mayor Emanuel will return to the site of Thursday’s dedication in December to take part in the formal dedication of the new WINGS facility.

Since taking office, the Mayor has led a number of domestic violence initiatives and has convened several law enforcement agencies, local government offices, prosecutors, and community service groups to align forces to break the cycle of domestic violence. To date, thousands of police officers across the city have completed an advanced training led by a citywide domestic violence prevention task force, including the Chicago Metropolitan Battered Women’s Network, to both improve supports to victims in response to reports of domestic violence and to increase prosecution rates for these crimes.

In addition, the City has piloted a new inter-agency response protocol in two police districts: the 3rd District and the 14th District. To prevent abuse, the pilot requires officers responding to domestic violence calls to complete an evidence-based risk assessment that determines further risk of domestic violence injury or murder. This multi-agency citywide pilot has increased domestic violence arrests by more than 50 percent since it began in 2013, and has also increased referrals to the Domestic Violence Hotline by 9 percent.

Mayor Emanuel has long advocated for support of domestic violence victims and their families throughout his career. Mayor Emanuel and Vice President Biden worked together to craft the Violence Against Women Act (VAWA) in 1994. The landmark federal legislation developed a comprehensive approach to improve the criminal justice response to violence against women. The VAWA provides access to services victims and their families need.

The Mayor encourages every Chicagoan to play a role in actively seeking to end domestic abuse of all types across the city. To report domestic abuse, Chicagoans should call 9-1-1. For more information and support, anyone can call the domestic violence help line at 877.863.6338.