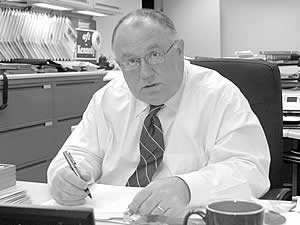 Washington, D.C.–(ENEWSPF)– Park Forest Mayor John A. Ostenburg joined more than 1,500 fellow local leaders in Washington, D.C., this week in promoting an agenda for economic growth for cities as part of the National League of Cities (NLC) 2011 Congressional City Conference.

As Congress and the Administration work to address economic recovery and budget concerns, protecting proven federal investments like the Community Development Block Grant (CDBG) program and rebuilding the nation’s transportation infrastructure system are the priorities for a successful Agenda for Economic Growth. In Park Forest, CDBG funds have been used for street repairs, street lighting, and water and sewer line repairs, Mayor Ostenburg said. He reported that Republican leaders in the Congress are proposing a 62 percent cut in CDBG funding, which would virtually eliminate future opportunity for Park Forest to gain those types of funds.

“With all the movements in Congress to cut domestic spending, cities and towns are in danger of losing important funding that has helped sustain us in the past,” Mayor Ostenburg said. “It’s important for our municipal leaders from throughout the country to come together and let Washington know our concerns.”

The Congressional City Conference is NLC’s annual legislative meeting designed to inform municipal leaders about federal policy issues. It also provides an opportunity for city leaders to bring local concerns to their federal elected officials in the nation’s capitol. Additionally, attendees participate in general sessions with national leaders and a range of educational, networking and strategy sessions, touching on other issues including local energy efficiency efforts, economic development, municipal finance and youth, education and families.

Prior to the start of the conference, Mayor Ostenburg participated in a meeting of the NLC Community & Economic Development Advocacy Committee, on which he has served for the last several years. Committee members heard from representatives of the Obama administration on programs that are available to assist homeowners who may be facing foreclosure.

While in Washington, Mayor Ostenburg also met with with Congressman Jesse L. Jackson Jr. (D-Illinois) and staff members for Senator Richard Durbin (D-Illinois) and Senator Mark Kirk (R-Illinois), in addition to various administration figures, to discuss important funding issues relating to Park Forest and the south suburbs. “Over the course of my time as mayor, the Village of Park Forest has received well over $20 million in federal funding of one sort or another,” Mayor Ostenburg said. “We must make our elected federal representatives aware of how important that funding has been and that it has been a major way of making important improvements without passing the burden on to local taxpayers.”

The National League of Cities is the nation’s oldest and largest organization devoted to strengthening and promoting cities as centers of opportunity, leadership and governance. NLC is a resource and advocate for 19,000 cities, towns and villages, representing more than 218 million Americans.