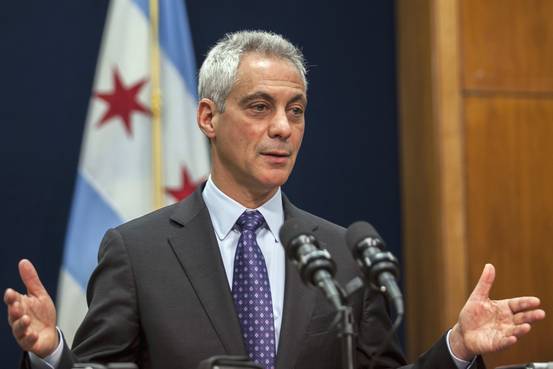 CHICAGO-(ENEWSPF)–October 11, 2016.  Mayor Rahm Emanuel today presented his 2017 budget proposal to the City Council that continues to make critical investments in Chicago’s families, neighborhoods, infrastructure and public safety, while building on his efforts to improve the City’s long-term financial stability.

“This is a budget unlike any other in recent memory. It is free of an immediate pension crisis and free of the black cloud of insolvency threatening the retirements of City employees and the financial future of Chicago,” said Mayor Emanuel. “While the crisis has receded, our work of righting the ship is not complete, and we will also work to ensure we can invest in our future, tackle new challenges as they arise and drive prosperity in Chicago’s neighborhoods.”

In 2011, the City of Chicago was facing an operating budget shortfall of $635 million. Over the past five budgets and continuing with the 2017 budget, the Mayor has made fundamental changes to the way the City manages its finances. The City’s 2017 budget shortfall is $137.6 million, the lowest in nearly a decade and 80 percent smaller than it was in 2012.

“As a result of the hard work done over the past five years to improve the city’s finances, today we can rise to meet new challenges before us, without creating new financial challenges, and we can confidently double down on our investments in Chicago’s future,” said Mayor Emanuel.

To increase economic opportunity in neighborhoods, the Mayor is launching the Chicago Community Catalyst Fund to provide targeted investments in businesses and community projects in the City’s neighborhoods most in need. This will be a separate fund that will be registered as a qualified investment vehicle that can accept and invest funds from the City and from private investors. The Fund will have a three year funding period, and the City will allocate at least $100 million to the Fund during the initial funding period.

To improve the way residents request services such as tree trimming, graffiti removal, potholes and more, the Mayor’s budget begins the process of modernizing the 311 system. Whereas the current system is telephone-based, the modernized 311 system will be interactive, allowing residents to be able to tweet and text the system, and receive real-time updates on neighborhood service requests. This work is expected to be operational by 2019. The City will use the proceeds of the sale of the Fleet and Facilities Management property on Goose Island, which will move to Englewood, to pay for the new, modern, mobile 311 system.

To strengthen public safety, the 2017 budget includes new resources for the Chicago Police Department, including additional police officers, detectives and sergeants; the size of the police department will increase by 970 positions by the end of 2018. The budget also provides new investments in technology, including body cameras, to help our police be more effective in solving and preventing crime.

To expand mentoring services for at-risk youth, the Emanuel Administration will invest $36 million over three years in quality mentoring programs with half coming from the City and the other half coming from the private and philanthropic sources. Through this initiative, the City will provide roughly 7,200 Chicago Public School 8th, 9th and 10th grade young men in communities most affected by violence with a mentor through high quality programs like Becoming a Man (BAM). Further, the successful Working on Womanhood (WOW) program will be expanded by 30 percent in 2018.

In total, since 2011, the City has identified over $600 million in savings and government reforms, changing the way the City delivers core services and ensuring investments continue to reflect the needs of Chicago’s neighborhoods.

Further, the City, over the last five budgets, worked to increase sustainable revenue sources, match expenditures to revenue, and take advantage of economic growth following the Great Recession. Through this hard work, the City does not rely on one single revenue source, but a collection of diverse revenues to meet our investments and close the structural deficit.

2017 revenue is projected to increase over the 2016 budget by $148 million. This is driven by growth in economically-sensitive revenue sources, like sales tax and personal property lease tax, coupled with growth in vehicle sticker tax revenue and changes to the State’s remittance of personal property replacement tax.

This budget also includes $175 million in TIF surplus from the City’s annual TIF surplus process and $37 million in sweeps of aging revenue accounts and grant funds. Additionally, the Mayor is closing the budget gap and investing in neighborhoods through improved investment returns and improved debt collection efforts.

Click here to review the Mayor’s remarks as prepared for delivery.