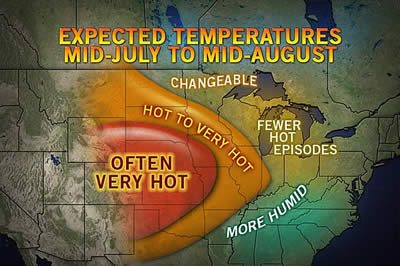 State College, PA-(ENEWSPF)- AccuWeather.com predicts heat will re-intensify over Kansas City, Omaha and Des Moines, while higher humidity leads to some downpours from Memphis to Louisville and Cincinnati into mid-August.

Areas from Minneapolis to Chicago, Detroit and Indianapolis will be near the edge of the extreme heat and drought from the Plains and more temperate conditions farther east.

The heat and accompanying drought continue to seriously impact the nation’s Corn Belt.

According to Nathan Fields, Director of Biotechnololgy and Economic Analysis for the National Corn Growers Association, "Producers up north still have a tremendous amount of yield potential left in their crop, provided they get timely rains."

AccuWeather.com agricultural meteorologists are concerned that new and frequent waves of heat will further stress crops over Iowa, Illinois and Nebraska into mid-August, while some rainfall opportunities may boost later-season crops over part of the Ohio Valley and around the Great Lakes.

Crops in the western third of the Corn Belt are likely to be stressed by frequent episodes of near-100-degree temperatures and stingy rainfall moving forward through the middle of August.

Progress of the corn in Iowa and Nebraska had greatly slowed as a result of the recent extreme temperatures and lack of rain. Only areas that rely on irrigation, such as portions of Kansas and Arkansas have been spared the worst.

The stress on even drought-resistant varieties from the central Plains to part of the Upper Midwest may not only result in lower yields by the harvest, but bring the risk of total crop failures at the local level.

A large part of the corn in the United States is grown in the northwestern part of the Corn Belt and the potential of extended heat and lack of sufficient rain in this area could have a greater negative impact on the nation’s overall production than anticipated thus far. 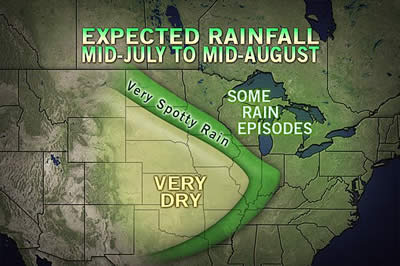 Meanwhile, as occasional downpours will be welcomed by agricultural interests in the Ohio Valley and central Great Lakes area, it is too little too late for much of this year’s corn crop in the area. However, other crops grown in these areas, such as soybeans, may be spared if the rains come.

According to Long Range Expert Joe Lundberg, "There’s a risk of being too optimistic for rainfall in the Ohio Valley and central Great Lakes area as even in a wet pattern, rainfall can be very spotty due to the nature of summertime showers."

While the overall upcoming pattern supports sporadic rainfall in some eastern and northern areas of the Midwest, there will still be significant areas that receive little or no rain within this zone.

Evaporation rates are very high into the first part of August. Soaking rain on a regular basis instead of a brief downpour is needed to be of benefit beyond a couple of days.

Turning things around in the Midwest as a whole will be a difficult task as dry ground tends to bring higher daytime temperatures, which in turn raises evaporation rates and so on.

Fields remained optimistic about minimal price increases to consumers, since many acres of corn were planted this year in the first place, but expressed concerned about recent years affecting in agricultural production in the U.S.

"We have had fairly adverse weather conditions for three years and we don’t usually see three years in a row come out like this. It is a unique set of circumstances we haven’t seen before." Fields said.

Fields was referring to heat and drought in Texas and the southern Plains last year as well as issues with flooding in some areas last year and in 2010.

On a positive note it a appears near-perfect weather conditions last winter and spring have a bumper crop of wheat on the way from the U.S. and Canada Prairies for 2012.