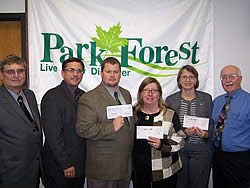 The two sides had been in negotiations since Canadian National announced plans to increase traffic along the 195 miles of track purchased from former owner Elgin, Joliet & Eastern (EJ & E) in January. “After lengthy deliberations, the Village of Park Forest has settled upon a package deal which we believe is in the best possible interests of Park Forest residents. With the pending increase of rail traffic through Park Forest’s corporate boundaries, issues related to safety, emergency response operations, economic development and environmental impacts such as noise and traffic congestion have been addressed within the package of agreements with Canadian National. Park Forest looks forward to working with CN on the implementation of all components contained within the settlement package,” said Mayor John Ostenburg. As part of the Surface Transportation Board’s environmental impact analysis for the CN acquisition, Village Officials submitted numerous points of protest on behalf of Park Forest and the perceived impacts to the community prior to the sale. Concerns addressed in correspondences with the STB, state and federal legislators, as well as CN officials included:

Objections to the sale of the EJ&E to Canadian National did not result in any altering of the transaction between the two rail companies. The STB, a federal agency whose jurisdiction trumps that of Park Forest, granted approval of the sale on January 31st, 2009. Prior to the transaction being finalized, Canadian National approached the Village with interest in purchasing a parcel of Village-owned land. The land, located within close proximity of the commuter lot at Hickory Street and Homan Avenue (including a small portion of the commuter lot itself), would allow CN, what they believed to be, an ideal rail switch from the east/west bound EJ&E lines to the north/south CN bound rails. After the sale of the line to CN was finalized in January, the Village took a closer look at the interest of CN to implement a rail switch–in hopes of finding some upside for the Village and its residents. A package deal between the Village and Canadian National was finally agreed upon August 27th. The six agreements that make up the deal include:

The deal, totaling $7.3 million dollars, is the largest in Park Forest’s 60 year history.

More on the deal

Park Forest will maintain 80% of the revenue stream for the Homan/Hickory commuter parking lot, which will be repaved and will also feature new lighting and fencing. Additionally, monies have been contributed to further emergency response operations, training and equipment as well as Park Forest economic development efforts.

The package also provides funds for a public attraction vision which will include construction of a train viewing platform, rail car feature and large-scale mural which may draw latent tourism benefits to Park Forest and the Old Plank Road Trail. Finally, the deal facilitates the transfer of bridge/overpass ownership over Orchard Drive to CN, with the rail company expected to paint the structure in the near future.

Crews are expected to complete the majority of the commuter lot overhaul before the end of 2009. Work on the implementation of the CN rail switch is set to begin in the coming weeks with the connection projected to reach completion by the end of 2010. As rail construction unfolds, the public park (complete with a rail caboose), a viewing platform and interpretive rail history signage will be constructed and in place by late-2010. A program is currently being developed by Village Officials which will allow for settlement funding to be passed on to those residential properties in Park Forest which abut the rail line. Periodic updates on rail and commuter lot construction, noise mitigation, rail park development and other associated items will be posted to the Village’s website.

Individuals with questions regarding the agreement should contact the Village Manager’s Office at 708-748-1129.